Contaminated water and air, as well as poor hygiene is spuuring fatal diseases, WHO warns 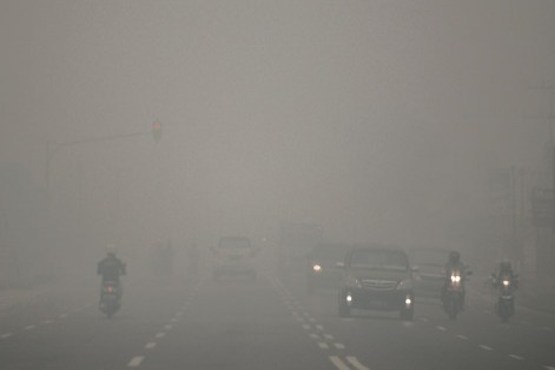 Motorists drive through thick haze in Palangkaraya, in Indonesia's central Kalimantan where respiratory illnesses have soared because of smog. The World Health Organization says pollution such as this is killing hundreds of children in Indonesia each year. (Photo by Bay Ismoyo/AFP)

Every year hundreds of Indonesian children aged under five die due to the effects of pollution, much of it caused by haze, according to a recent World Health Organization (WHO) report.

Unsanitary and polluted environments, that include dirty water and air as well as lack of hygiene, can lead to fatal cases of diarrhea, malaria and pneumonia, and kill 1.7 million children a year around the world, according to the WHO.

"A polluted environment is deadly — particularly for young children," WHO Director-General Margaret Chan said in a statement.

Indonesia's Health Ministry said some 800,000 children in Indonesia contracted pneumonia in 2016, up from 554,000 the previous year. Some 23 children die every day or 276 a year, the ministry said.

Divine Word Father Frans Sani Lake, coordinator of the Justice, Peace and Integrity of Creation in Kalimantan, said air and water pollution were major causes of child death in Indonesia with much of the air pollution coming from haze caused by slash and burn fires.

West, South and Central Kalimantan, as well as Jambi, Riau and South Sumatra are the provinces hardest hit by air pollution originating from fires in peatland and plantations, he said.

Father Lake said his organization has been campaigning against starting fires and promoting healthier lifestyles along with Caritas and various church dioceses.

He said that he and his group had been "promoting Pope Francis' environmental encyclical Laudato Si' among Catholics from parish to community level."

Franciscan Father Peter Aman, director of the Justice Peace Integrity and Creation from the Indonesian Franciscan Order, said pollution in Indonesia was a major problem. Apart from the haze, harmful air, water and ground pollution also stemmed from mining.

Children are also exposed to harmful chemicals in food, water, air and products around them, Father Aman said.

"The Indonesia Catholic Church," he said, "is very concerned about this problem but efforts to tackle it are very disjointed when everyone should be acting together."

Father Aman said that the "government has to enforce laws and come down hard on companies polluting the environment."

Zenzi Suhadi of the Indonesian Forum for the Environment said some 40 million Indonesian people are regularly exposed to pollution with around 500,000, including children, suffering upper respiratory tract infections.

"All this time we have struggled to encourage the government to revoke licenses of companies damaging the environment and impacting people's lives," he said.