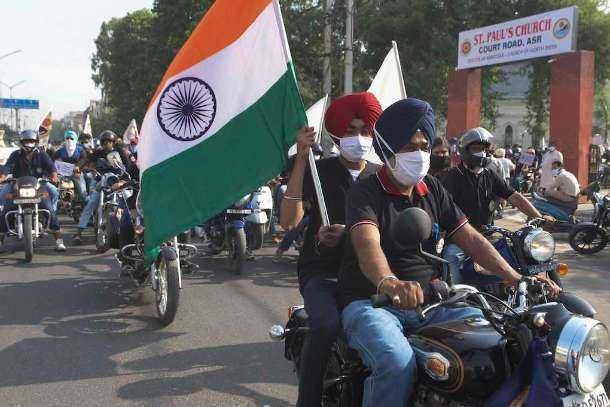 People ride on their motobikes during a "Fight Covid-19 Awareness Building Motorcycle Rally" to raise awareness about the use of wearing face masks and social distancing norms against the spread of the Covid-19 coronavirus, in Amritsar on October 20, 2020. (Narinder Nanu / AFP)

A season of pollution and religious festivities threaten to spiral Covid-19 cases in India, the world's second-largest pandemic affected country, with more than 7 million cases.

Prime Minister Narendra Modi addressed the nation on Oct. 20, the seventh time since March when he enforced the lockdown to check the pandemic spread. But this time, he offered no new measures to contain the virus.

Modi stressed the importance of social distancing and hygienic measures, particularly during the October-December season when Indians celebrate a series of festivals known for their large gatherings and processions.

The season has in store big festivals like Diwali (festival of lights) and Navratri (nine nights festival) for Hindus in the country. Sikhs celebrate the birth anniversary of their founder Guru Nanak in November. Christmas also has now become a secular holiday time in the country.

Modi's critics say the prime minister failed to address the increasing unemployment and economic depression in the country. He also chose not to speak about the astronomical rise in the pandemic, the deaths, and the possibility of making a vaccine available in the country, they said.

India has recorded 7.6 million cases so far, with 115,000 fatalities. The highest number of 1.6 million cases came from Maharashtra state, mostly from its capital Mumbai, India's business hub. At least 42,240 have died in that central Indian state so far.

The United States, with 8.5 million cases and a death toll of 226,149, is the only country worse affected than India, data show.

"Modi brushed aside all shortcomings in the tackling of the pandemic and instead claimed that his government's handling was a success," said Sitaram Yechury, a Communist leader.

Modi's critics say the Prime Minister should have addressed pressing issues such as increasing pollution levels.

There have been no studies in India yet to examine the impact of air pollution on Covid-19 infection and recovery rates. "But doctors and epidemiologists have long warned that toxic air will only hamper India's fight against the virus," says a BBC report.

The Diwali festival season in November, when millions of Hindus burn crackers, aggravates the situation.

"The Prime Minister should have addressed these issues," says Akhtar Ahmed,a Muslim trader in East Delhi. However, Modi was using the televised speech to make "false claims about big achievement" in fighting the pandemic, he said.

The federal Health Minister Harsh Vardhan told the Indian Parliament in September that the pandemic fatality rate was quite low at 1.67 percent.

But critics say the official data under-report the Covid-19 deaths. The ignorance of the people about the pandemic and lack of adequate medical tests help officials record a reduced fatality rate, they say.