Polls in Thailand close with little hope of resolution

Protesters remain resolute as revotes expected in some constituencies 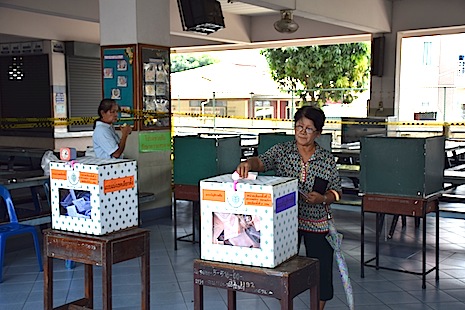 A bitterly divided Thailand went to the polls on Sunday with little hope that the outcome would end a push by anti-government protesters to bring down the government of Prime Minister Yingluck Shinawatra.

Despite weeks of mass street demonstrations aimed at forcing her from office, Yingluck was widely expected to extend her billionaire family's decade-long winning streak at the ballot box.

Members of the People’s Democratic Reform Coalition blocked major polling sites and encouraged election workers to stay home, but despite their efforts the commission said about 90 percent of polling sites operated normally.

At Holy Rosary Catholic School in Bangkok’s Chinatown, a small number of voters were on hand to cast their ballot when polls opened at 8 a.m. Election workers there said they were expecting the turnout to remain low throughout the day.

Across town at St John’s Polytechnic School in Ladprao district, there was a low turnout of about 200 people by 2 p.m., workers said. At nearby St Dominic’s Catholic School, polling was canceled when elections workers failed to show, a school security official said.

Nakrit Sawettanan, a US-educated lawyer who serves as adviser to the minister of information and communication technology, said outside St John’s that he found troubling the “hate speech” used by both protesters and government supporters.

He did not expect the election to heal Thailand’s political and ideological divide.

“I want peace. The Thai people want peace,” he told ucanews.com before casting his ballot. “But to see two groups of people hate each other in this way, I am afraid this could lead to civil war and more hatred among the people.”

Apichart Intravisit, a commentator for Vatican Radio and a professor at Assumption University, said he declined to vote because the election was not “fair or justified”.

“This election was called because it was a convenient way for this government to retain power,” he told ucanews.com, adding that protesters won’t stop until the Shinawatra regime is toppled.

Sunday’s election remains unlikely to resolve the political crisis. The Democrat Party said that it was preparing to mount a legal challenge to the vote.

"We are compiling evidence and information to ask the court to nullify this election," said deputy leader Ongart Klampaiboon on Sunday.

The protesters have vowed to keep up their fight to topple Yingluck, whatever the outcome of the polls.

"The winners will not represent the Thai people," anti-government rally leader Suthep Thaugsuban told supporters on Sunday. "The winners must be Thaksin slaves."

Even if Yingluck wins she will remain in a caretaker role with limited power over government policy until elections are held in enough constituencies to have a quorum in parliament.

"Normally even if one polling station is blocked we cannot announce the result," said Election Commission member Somchai Srisutthiyakorn.

"As long as there are protests and no negotiation, then parliament cannot open."

Tensions were running high on Sunday after a dramatic gun battle between rival protesters on the streets of the capital on the eve of the election that left at least seven people wounded. But there were no reports of serious violence on election day by the time polls closed.

At least 10 people have been killed and hundreds injured in clashes, grenade attacks and drive-by shootings since the opposition rallies began, with victims on both sides.

The street protests were sparked late last year after Yingluck introduced an amnesty bill that would have allowed her billionaire brother and former Prime Minister Thaksin Shinawatra, who lives in self-imposed exile in Dubai after fleeing a corruption conviction, to return to Thailand.

Suthep, a former deputy prime minister, has called for the dissolution of the current government and the creation of an unelected “people’s council” to rule until anti-corruption measures are instituted.

Phil Robertson, deputy Asia director for Human Rights Watch, said that while it was encouraging that the election took place without any major violence, he was disturbed by the protesters attempts to block voting.

"It was profoundly disturbing that the protesters felt it was their right to violate the rights of their fellow citizens for their own political purposes," he told ucanews.com.

The battle for control of Thailand now moves from the streets of Bangkok to the courts and the national anti-corruption commission, he said.

"We'll have to see whether these organizations will truly be impartial. Will they ensure justice? Will they decide on the basis of facts and analysis or some other criteria?”

Speaking on election eve at Victory Monument, where a grenade attack on Jan 19 left 28 people injured, Pornthep Chatpinyakoop, a professor at King Mongkut's University of Technology, said he remained “optimistic on Thailand’s future” whatever the outcome of the election.

He said the several months of protests and demonstrations against what is seen by protesters as a corrupt government have taught the Thai people to stand up for their rights.

“We used to accept whatever the government told us, but we will no longer be quiet,” he said. “I used to be like that, but no more.”