Politics suspected in burning of Marian statue in India A Marian statue was set on fire in India’s Madhya Pradesh state in the latest attack against Christians amid reports that more than 1,000 such attacks have occurred in the past year.

Church leaders suspect the attack could have political undertones ahead of the national election due to take place in two months.

The 70-year-old parish has about 4,000 Catholics and has “never before reported such hostility” from the majority Hindus in the area, he told ucanews.com.

Church leaders believe the attack is an attempt to create a political advantage for the Bharatiya Janata Party (BJP) when it seeks re-election after its term to lead the New Delhi government ends in May.

In Madhya Pradesh, the BJP lost power to the rival Indian National Congress in December. The attack could be part of an attempt to project the Congress as inefficient and garner Christian votes, Christian leaders like Father Shah suspect.

The attack happened as Persecution Relief, an ecumenical forum monitoring violence on Christians, released its annual report claiming that Indian Christians suffered 1,059 incidents of persecution in 2018, up from 736 incidents in 2017.

“The fringe elements becoming bolder and bolder and taking center stage in some areas is a cause of worry,” Bishop Theodore Mascarenhas, secretary-general of the Indian bishops’ conference, wrote in his foreword to the report.

Since the BJP came to power in 2014, Hindu groups have stepped up their action to achieve their goal of making India a Hindu theocratic nation, leading to increased attacks on Christians and Muslims. 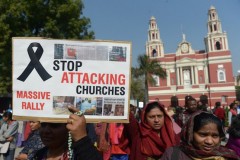 “Persecution comes in different forms today: disruption of peaceful gatherings for prayers, physical attacks against innocent worshippers, use of laws to intimidate and harass institutions and persons,” Bishop Mascarenhas said in his note.

Shibu Thomas, founder of Persecution Relief, told ucanews.com that 2018 witnessed a 118 percent rise in incidents such as threats, harassment and intimidation compared to 2017.

Other blackspots were Tamil Nadu, Bihar, Madhya Pradesh and Telangana, which together accounted for 59 percent of attacks reported in 2018.