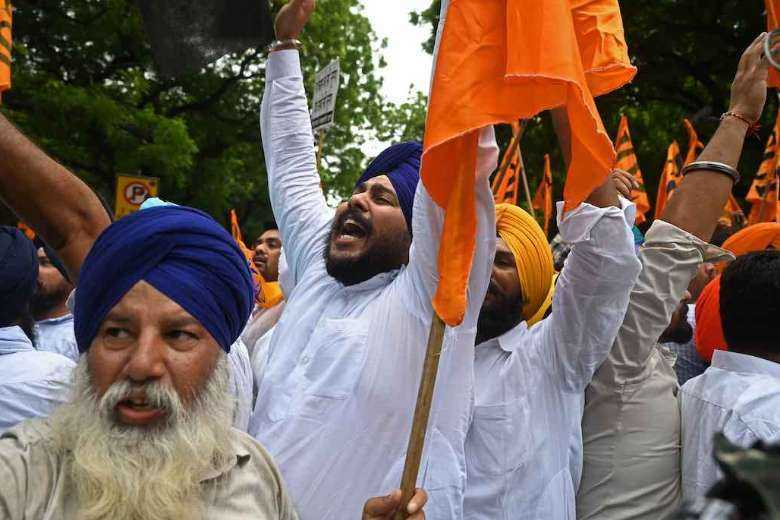 Supporters of the Shiromani Akali Dal party take part in a protest march in New Delhi on Sept. 17 to mark one year since the enactment of the central government's agricultural reforms. (Photo: AFP)

A top Sikh religious body in India’s Punjab state has launched a campaign against Christian missionaries allegedly luring Sikhs, but some observers see politics in the move ahead of next year’s state election.

The SGPC campaign aims to “counter forced conversions, which is a dangerous attack on the Sikh religion,” said Jathedar Giani Harpreet Singh, leader of Akal Takht, the seat of power based in Sikh’s holiest Golden Temple in Punjab’s Amritsar city, reported the Indian Express newspaper on Oct. 13.

He said Christian missionaries have been running a campaign in the India-Pakistan border area of the state for forced conversions over the past few years. “Innocent people are being cheated or lured to convert. We have received many such reports.”

However, SGPC chief Bibi Jagir Kaur made no allegations against missionaries but said the campaign aims to strengthen Sikh people in their faith.

“The initiatives and campaign will not only bring firmness among Sikhs toward their faith but also make the young generation take pride in their history and culture,” she said in a statement.

Some people like political analyst Vidyarthi Kumar see political aims in the move in Punjab, which goes to the polls next February-March along with politically sensitive states like Uttar Pradesh and Goa.

SGPC chief Kaur, the first woman to be elected to the position in 1999, is also a leader of a Sikh-supported political party called Shiromani Akali Dal. She held the SGPC leadership for two terms previously and was re-elected in November 2020. But her party has fared poorly recently, Kumar said on Oct. 14.

“She has been a controversial leader and was once a Punjab minister. All her efforts at this juncture could be aimed at winning over mass support for Akali Dal,” Kumar told UCA News.

“Akali Dal has been out of power for the last five years in Punjab and did extremely poorly in 2019 national polls.”

Christian leader A.C. Michael, a former member of the Delhi Minorities Commission and national coordinator of the United Christian Forum, denied the allegations against missionaries.

“The Christian community is not in the business of multiplying its numbers as the political parties are doing to capture power,” he told UCA News on Oct. 14.

“We do share the Word of God as preached by Jesus Christ and if anyone finds it good and joins the faith, it is one's wish as guaranteed in the constitution of India. But there is no conversion taking place through fraudulent means or allurement.”

For Christians, Michael said, “evangelization is a continuous process. Every Catholic diocese in India has systems to strengthen the faith formation of its members. Similarly, SGPC has started a door-to-door campaign to sensitize the community.”

He said the campaign should not be termed as something against the Christian faith. “There is no such call from the ramp of the SGPC. This is propaganda to malign Christians in India.”