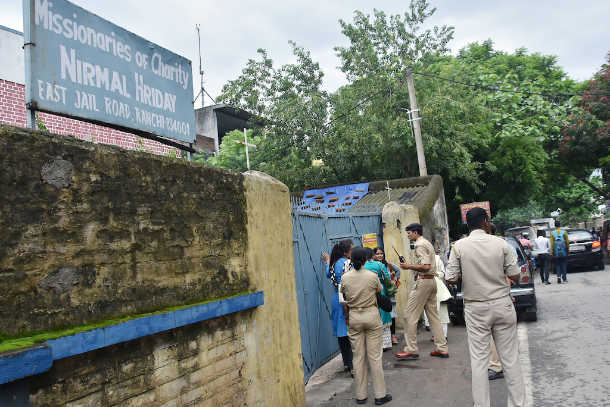 Indian police gather outside a Missionaries of Charity care home in Ranchi on July 4, 2018, after a staff member and a nun were accused of selling babies born to unwed mothers. (AFP photo)

Christian leaders in poll-bound Jharkhand see a political move by the pro-Hindu Bharatiya Janata Party in raking up allegations against missionary institutions in the eastern Indian state.

Ahead of a state election due at year-end, Samir Oraon, a BJP parliamentarian, accused opposition political parties of having "a soft corner" for "criminal activities" of Christian institutions.

The election for the 81-seat legislative house is due before Dec. 23 when the term of the current BJP state government ends. Local reports say election schedules will be announced before the end of October.

As political parties prepare for the polls, Oraon spoke to media on Oct. 18 in Ranchi. He particularly spoke about child trafficking allegations against Nirmal Hriday (tender heart), a care home run Missionaries of Charity nuns.

The BJP politician said the opposition Congress party and local tribal-based parties have been "silent about such crimes" of Christian missionary institutions.

Father Xalxo said it was "unfortunate that a person like Oraon holding a responsible position made such wild allegations."

He said the care home continues "legally because it is registered with the government and has complied with all demands of the laws."

The care home hit the headlines after its head nun Sister Concilia Baxla was arrested on July 4, 2018. The Missionaries of Charity congregation, founded by St. Mother Teresa of Kolkata, runs it in Ranchi, the state capital.

Police arrested Sister Baxla and Anima Indwar, a staff member, following a complaint from a childless couple that Indwar took US$1,760 promising to provide them with a baby for adoption but failed to keep her promise.

Police recovered part of the money from Indwar's house.

The nun has denied any involvement in Indwar's activities but was released on bail only on Sept. 27 after 15 months in jail.

Oraon said that, with the exception of the BJP, all local and national political parties in Jharkhand "are silent on the child trafficking issue."

"The opposition has a soft corner for such criminal institutions of Christian missionaries," he said.

According to Oraon, the nuns' care home admitted pregnant rape survivors and unwed mothers without informing the police. Their babies were traded for money, he alleged.

Father Xalxo dismissed the "wild" allegations. "If the allegations are true, why did the government fail to act?" the priest asked.

Following the allegations, the BJP state government initiated a series of investigations against Missionaries of Charity institutions and church-run charity organizations purportedly to check if they misused funds for conversion activities. Police have not filed any charges after the investigations.

Even though allegations against Sister Baxla are before a court, Indian law considers an accused person innocent until proved otherwise in court,Father Xalxo said.

"The Christian vote is important in certain pockets of the state. The BJP does not expect to get their votes but wants to consolidate Hindu votes by projecting itself as a champion of Hindu causes and fighting missioners," he said.

Jharkhand has about 9 million tribal people in its population of 33 million, while half of its 1.5 million Christians are Catholics. In some pockets, the Christian presence is as high as 20 percent

"The nuns take care of unwed mothers and their children. They do it out of compassion, especially against a background of a growing number of pregnancies out of wedlock," Tirkey said.

"If the BJP considers it a crime, can they suggest an alternate system to help these women?"

Ever since the BJP came to power, church leaders say, attacks and harassment against Christians have increased in the state from Hindu groups that want to make India a Hindu-only nation. They find support from the BJP, which backs the idea of Hindu nationhood, it is claimed.