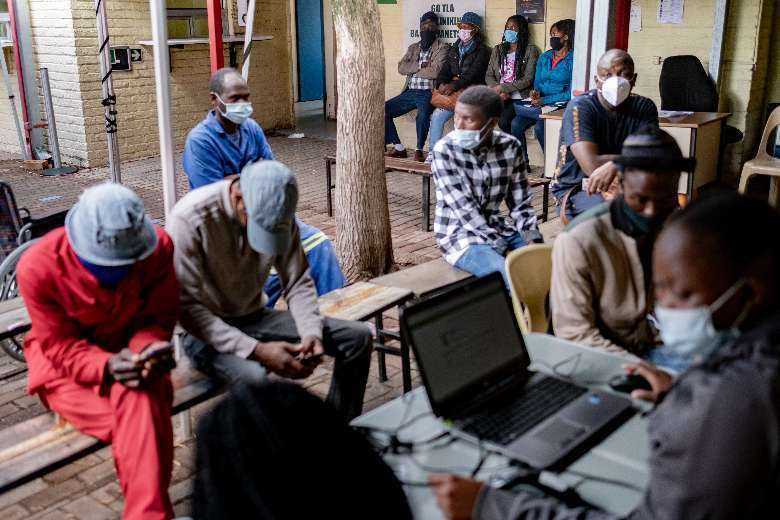 South Africans queue at a clinic to receive Covid-19 vaccines in Johannesburg on Dec. 8, 2021. (Photo: AFP)

Vaccines have become a sequestered asset to maximize the return for global pharmaceutical majors and a safe means to increase the electability of politicians. In the pharma-politician nexus, billions of people worldwide have been left unvaccinated.

From the very first vaccine against smallpox to the latest mRNA vaccines against Covid-19, vaccines help protect the global community. However, accessibility to Covid-19 vaccines is deeply connected to intellectual property rights (IPRs).

At the 49th Session of the Human Rights Council at the beginning of this month, the Vatican Permanent Mission to the United Nations stressed that “IPRs should facilitate the pursuit of the common good in a manner conducive to social and economic welfare.”

Sticking to its stance, the Vatican called for a temporary suspension of IPRs to ensure universal access to pandemic vaccines.

While vaccination in the richest countries is so advanced that jabs for children are being administered, poor people in the low-income countries of Asia and Africa have completely missed the bus.

As of March 20, more than 5.04 billion people worldwide had received a dose of a Covid-19 vaccine, equal to about 65.7 percent of the global population, with the UAE, Chile, Brunei, Portugal, Malta, Cuba, Qatar, China, Argentina, Cambodia, Bhutan and Singapore leading the pack.

The main hurdles faced by poor nations are gaps in cold-chain shortage, vaccine hesitancy and a paucity of funds to support distribution networks

The two largest nations, China and India, have improved their situation by administering vaccines produced locally. But that is not the case for countries like Myanmar, Pakistan, Bangladesh and Nepal which depend on others for vaccines.

Oxford AstraZeneca is the most preferred drug and is used in 183 countries, followed by Pfizer BioNTech, used in 158 nations.

Africa has the slowest vaccination rate, with just 19.2 percent of its population receiving at least one dose.

Billions of vaccine doses have now been pledged for global donation, mainly by the US, China and the European Union. However, vaccines are donated based on narrow geopolitical considerations rather than need.

Low-income countries are relying on the UN-sponsored vaccine-sharing arrangement called COVAX, which aimed to administer two billion doses by 2021-end but missed the global goal because of production problems, export bans and vaccine hoarding by rich countries.

When vaccines became easily available last year, wealthy nations laid their hands on the first to inoculate their own citizens. The main hurdles faced by poor nations are gaps in cold-chain shortage, vaccine hesitancy and a paucity of funds to support distribution networks.

The queue-jumping by wealthy countries has left about three billion people worldwide who are yet to receive a single dose.

Since most of the approved vaccines now in use do not provide immunity against new variants such as Omicron, SARS-CoV-2 will continue to circulate and mutate even among vaccinated populations

While rich countries are opening up their economies, the slow rollout of vaccines in poor nations will give the coronavirus a chance to mutate again and come out with new variants.

The rapid emergence of the Delta and Omicron variants has increased the need for booster doses. Israel, a frontrunner in providing booster doses, is now developing a fourth vaccine dose.

Appeals by the World Health Organization (WHO) to put booster doses on hold to prioritize first doses to the world’s three billion unvaccinated people have fallen on the deaf ears of rich nations who see boosters as the new means to open their economies and end unpopular mask-wearing and social distancing norms.

Since most of the approved vaccines now in use do not provide immunity against new variants such as Omicron, SARS-CoV-2 will continue to circulate and mutate even among vaccinated populations.

There are also unconfirmed reports that “old vaccines” will be dumped on poor nations as the rich nations plan to switch over to the second-generation redesigned vaccines.

Developed nations are also planning to dispatch about-to-expire batches of vaccine to poorer countries that can do little to address vaccine inequities and vaccine nationalism, which have been decried by Pope Francis repeatedly.

If vaccine diplomacy is the new great game played by power-hungry politicians, it is fraught with the risk that no one will be left a winner

The developed and smaller nations in Asia, including South Korea, Singapore, Japan and Malaysia, have a higher vaccination rate of some 75 percent of the population and Singapore tops the group with 87 percent. The high rate is attributed to their strong logistics infrastructure.

Some of these economies have benefited from dense populations that have made it possible to vaccinate many people at one time.

A major hurdle faced by low-income countries is the lack of cold-chain storage facilities, which are mainly concentrated in urban centers, such as Kathmandu in the case of Nepal. Distribution in rural and remote regions with limited power grids, roads and health workers is a problem for these nations.

However, Vietnam and Thailand have relatively much higher vaccination rates despite millions of people living in villages.

Cambodia’s success comes from its use of technology. Early on in the pandemic, the country banked on mobile apps for vaccination and contact tracing. Its KhmerVacc app helped people to register for vaccines while providing people with a QR coding technology for contact tracking.

The goal of “leaving no one behind” from a Covid-19 vaccination perspective is not going to be achieved unless global pharma majors part with their IPRs.

If vaccine diplomacy is the new great game played by power-hungry politicians, it is fraught with the risk that no one will be left a winner.