Brother Krzysztof Gniazdowski has been serving in Mongolia since 2007. (Photo: Salesian Mission Mongolia)

“Keep praying for me and my brothers” is the simple message for anyone who drops by the profile of Brother Krzysztof Gniazdowski on the Salesian mission website.

The Polish Salesian lay missionary has served in Mongolia since 2007 and has spent most of his 25 years of consecrated life in the East Asian country.

Brother Gniazdowski, 49, was born on April 17, 1971, and is the third of three sons and one daughter of his parents. He has a master’s degree in pedagogy in family social work.

Originally from Skwierzyna in western Poland, he took his first vows with the Salesians on Sept. 22, 1995, and final vows on Aug. 22, 2000. He worked in a Salesian mission in Poland before joining the Mongolian mission.

In Mongolia, he first worked for the Don Bosco Technical School in capital Ulaanbaatar that offers vocational courses on auto mechanics, welding, plumbing, design and sewing, office administration and construction. For about two decades, the school has enabled more than 1,000 students, mostly poor school drop-out children, to graduate and find jobs to support their families.

He has also been involved with a Salesian-run orphanage for street kids in the capital that has been a home for hundreds of poor, abandoned children since 2003.

Brother Gniazdowski now oversees the Salesian mission in Darkhan, Mongolia’s third largest city, where another vocational school for 300 students was set up in 2005.

The school is close to St. Mary, Help of Christians Church. It offers courses for students in a range of useful subjects: computer skills, writing and formatting documents, processing video files, drawing and handicrafts, and foreign languages. Many Mongolians emigrate to China, Japan and Korea for work and settlement, so the courses aim to help them find a good job abroad by teaching conversational English, Chinese, Korean and Japanese.

Salesians also run a library for local residents and encourage all including children to read books regularly.

In 2020, Brother Gniazdowski celebrated his silver jubilee of consecrated life with his students and confreres in Mongolia. 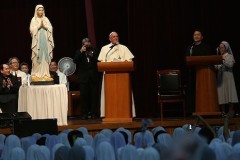 On the occasion he also wrote an article supplemented with colorful photographs for Misje Salezjanskie (Salesian Missions), a magazine published by the Mission Office in Polish capital Warsaw. The article, “Mission Mongolia,” offers vivid details about his personal, joyful mission despite various challenges.

A mission of joy, love and hope

“When I move away from the metropolitan area, it seems time has stopped ... in places with steppes, animals, birds of prey, vast uninhabited spaces, and piercing wind,” he said.

He notes that Mongolians experience a harsh continental climate. During summer the temperature reaches over 40 degrees Celsius but during winter it drops below minus 40C.

The missionary is also fascinated by the Gobi, the largest desert in Asia, where nomadic tribes are found who move from place to place in search of water and pastures for animals, mainly sheep and goats.

The Gobi also provides a breeding ground for camels and yaks amid the vast steppe landscapes, sands, meadows, rocky areas and the Altai Mountains, a sanctuary for many rare species of animals and plants.

“Apart from extreme weather conditions, one can also come across ruins of Tibetan monasteries, destroyed during the communist period and archaeological excavations in the Gobi. This is where the first dinosaur eggs were discovered,” Brother Gniazdowski noted.

In Darkhan, almost every day he meets with poor children who need support.

“Many Mongolian families do not take care of their children and are only interested when the government gives them money. And it’s often the lack of income which causes families to break up. Children suffer the most because they remain on the streets where they steal and are victimized and exploited,” Brother Gniazdowski told Salesians ANS service.

In 2015, the Salesians opened a youth center in the Shuwuu area, which had been lacking a safe, youth-friendly environment for years. Besides running an elementary school for the little ones, a playground sparked huge cheers among hundreds of children who flock to play every day.

Brother Gniazdowski is saddened by the plight of people facing poverty, especially children. He recalled one incident involving a poor boy that made him emotional. He was about to throw away a pair of his sneakers as they were worn out. Suddenly, a kid approached and furtively asked for them.

“The same day I saw the boy playing soccer wearing my old shoes. No one knew they were my worn-out shoes. I told myself: 'I vowed poverty but I see that these are the people who are truly practicing poverty,'” he said.

In recent years, thanks to Pope Francis’ celebrated environmental encyclical, Laudato Si', Brother Gniazdowski has also been involved in agricultural and ecological projects.

Some five kilometers from the Salesian center in Darkhan, he has been looking after a small Salesian farm and nursery.

“During the vacation season and early spring after school, we take students to a farm. There they learn how to learn how to till the soil, sow, plant and care for vegetables including tomatoes, cucumbers, cabbage, lettuce, pumpkins, watermelon, cucumbers, squash, broccoli,” he said.

Together with students, he also plants various kinds of Mongolian natives, shrubs, trees and flowers.

Many of the young people enjoy learning how to farm, especially during harvest time when they receive the fruits of their work. Crops are sold and the money goes to a special fund set up for children and youth for scholarships or school admission fees.

The students also learn about protecting their environment. They segregate waste and sew shopping bags from fabrics for use instead of plastic bags and packages.

Help for the needy

Like other Salesians, Brother Gniazdowski also finds great joy running the conventional Salesian Oratory, which is a place for learning, playing, prayer and work for children and youth.

“They come and play football, volleyball, table tennis, learn how to ride bicycles and learn the basics of traffic. With the help of volunteers and teachers, they do their homework and receive help in learning foreign languages and in mathematics,” he said.

After classes, children and youth gather for a short prayer. “Many are interested in the Catholic faith, asking questions and seeking solutions to their problems.”

St. Mary, Help of Christians Parish in Darkhan has only 250 Catholics, all ethnic Mongolians. The situation is different in the capital where Catholics hail from various nationalities including Koreans and Filipinos.

The faithful remain committed to church rules and rituals such as sacraments like matrimony. The idea of the indissolubility of marriage is surprising to Mongolians in a country where conjugal infidelity and divorce are common.

Brother Gniazdowski loves the traditions, rituals and hospitality of Mongolians that are influenced by Tibetan Buddhism.

The missionary is compassionate about Mongolian families who live in extreme poverty.

“Many of them live on garbage dumps and they look for what can be recycled and still be used. They go around with big bags in which they collect cans, bottles, rags and cardboard and sell them to make a few pennies,” he said.

He is amazed by the incredible modesty and simplicity of people who teach him humility through their poor but peaceful lives.

“I am happy to live and work in Mongolia among people who, in spite of deprivations and difficulties, trust that the next day will be better,” he said.

Mongolia and the Church

Mongolia, a country of some 3.2 million, is a mineral-rich nation but some 28 percent of the population live below the poverty line, according to the World Bank.

Poverty in Mongolia declined steadily after the country parted ways with communism in 1991 and entered a free market economy. Mongolia’s economic success in recent decades is mostly credited to foreign investment linked to vast mineral resources and mining.

The mining industry is a mainstay of the Mongolian economy but is also blamed for an acute water crisis by causing depletion of groundwater and polluting surface water. According to the 2030 Water Resource Group, about 40 percent of Mongolians don’t have proper access to a safe water supply.

Catholicism arrived in Mongolia in the 13th century during the Mongol empire but withered away with the end of the Yuan dynasty in 1368. Although missionary activities resumed in the mid-19th century, they ceased to function when a communist regime came to power.

With the fall of communism and emergence of democracy in 1991, Catholic missionaries arrived and rebuilt the Church from the ashes. The Church currently has about 1,200 Catholics in four parishes.

Salesian missionaries, who arrived in Mongolia in 2001, play an important role in the Church’s mission, providing critical support for poor children and families to ensure they have equal opportunities for a better future.

Salesians serve from three mission stations in capital Ulaanbaatar, Shuwuu, about 30 kilometers from the capital, and in Darkhan, some 229 kilometers away.

They run a daycare center and elementary school, centers for street children and disadvantaged youth and two technical schools. A vital service provided by Salesians is a safe water supply point at Shuwuu mission center that provides clean water for hundreds of families every day.