Police Master Sergeant Hensie Zinampan is seen here being quizzed by reporters following his arrest in Manila on May 31. (Photo: Jervis Manahan)

A policeman in the Philippines was arrested on May 31 for shooting dead a 52-year-old woman in front of her young granddaughter in a murder that has shocked the nation.

The shooting of Lilybeth Valdez in Quezon City, a Manila suburb, was caught on camera and uploaded on social media.

Master Sergeant Hensie Zinampan appeared to be drunk when he shot Valdez in the head at point-blank range during an altercation outside a grocery store.

Footage shows Zinampan pulling Valdez to him by her hair as he shot her. It is believed he accosted the woman over a conflict he had with her son.

The killing has drawn condemnation across the country.

Society of Divine Word Father Flavie Villanueva called the killing brutal and a product of the “culture of death” advocated by President Rodrigo Duterte.

This is what happens when the leader of the nation declares kill, kill, kill

Father Villanueva has been vocal in criticizing Duterte, accusing him of encouraging policemen to kill without just cause.

“This is what happens when the leader of the nation declares kill, kill, kill … Not only policemen become emboldened but anyone who has a gun becomes empowered to kill,” Father Villanueva said in a social media post.

He was referring to comments made by Duterte in March on how security forces should deal with rebels and criminals.

“If there’s an encounter and you see them armed, kill. Kill them, don’t mind human rights. I will be the one to go to prison, I don’t have qualms,” Duterte reportedly told them. 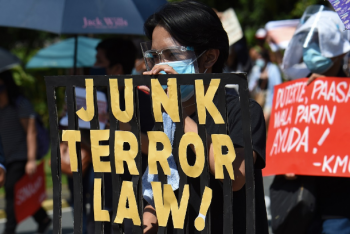 Father Villanueva said killings like Valdez’s would not be the last if police were being encouraged to carry them out by their commander-in-chief.

"It’s come to this, a 52-year-old feeble grandmother being shot,” he told UCA News.

“Thou shalt not kill. Does this have any meaning to us today? The words of any president or commander-in-chief become an unwritten policy, especially when expressed in public and with conviction.

“The consequence of Duterte’s words is a disillusioned cop thinking that it is all right to use violence and force to inflict fear and get away with murder.”