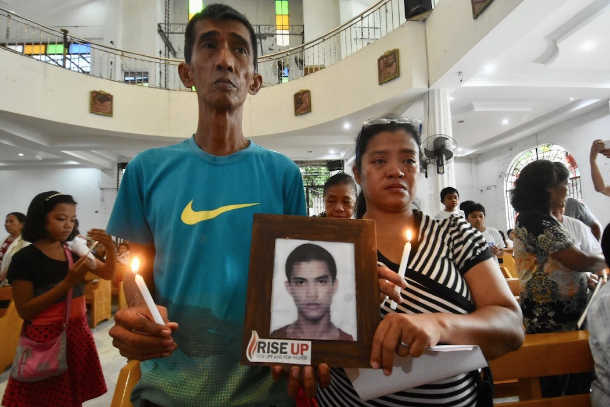 Normita Lopez (right), mother of one of the victims of drug-related killings in the Philippines has welcomed the government's decision to charge the police officer allegedly responsible for the murder. (Photo by Angie de Silva)

A police officer accused of killing a 23-year-old epileptic youth at the height of the Philippines' "war against drugs" has been sacked and is to face murder charges.

Normita Lopez, mother of Djastin Lopez who was killed in 2017, said the decision by the Office of the Ombudsman to charge police officer Gerry Genalope was a "crack in the wall of impunity."

Genalope allegedly shot dead Djastin while he was begging for his life in Manila's Tondo district, an urban poor community.

Ombudsman Samuel Martires last week ordered the forfeiture of Genalope's benefits from the service and that he be fired.

Martires also approved the filing of murder charges against the officer who, like other law enforcers involved in at least 5,000 killings, claimed that Djastin fought back against arresting officers.

Normita received the news on March 29, a few hours before she performed in a play "War of the Monster," a theatrical presentation about the drug-related killings in the Philippines.

The grieving mother announced her victory during a monologue, which was taken from a volume of poetry she wrote for her lost son.

Witnesses said Genalope shot Djastin while the young man was begging for his life. The policeman slapped and then repeatedly shot Djastin who writhed on the ground with the onset of an epileptic attack.

In its decision, the Office of the Ombudsman said the policeman "clearly perpetrated said acts with treachery."

"His assertion that it was Djastin who first fired at him and that he merely acted in self defense are matters that can be best passed upon after a full blown trial on the merits," read the decision.

Witnesses claimed that other police officers also shot at Djastin, but the Ombudsman dismissed the charges, saying the complainant failed to substantiate the allegations and identify the culprits.

Normita said a representative of the policeman have reached out to her family "for a settlement."

"I told [that person], tell them there is nothing to talk about. We will see each other in court," she said. "You do not bargain over a murdered son."

"I want him behind bars," said Normita.

"As I told students during the play, every ray of light is cause for rejoicing," she told ucanews.com.

She said her strength comes from other mothers and wives of dead victims fighting for justice and from the survivors of the government's war against drugs.