Police have traced a Catholic priest a fortnight after he went missing from his southern Indian parish.

Father Santhosh Joshi, the parish priest of St. Anthony’s Church in Mysore Diocese, was reunited with his family on Aug. 29. The disappearance of the 37-year-old priest came to light on Aug. 21 when he was unavailable for a parishioner's funeral service. He was reportedly last seen in the parish on Aug. 16.
Donate to UCA News with a small contribution of your choice
When parishioners failed to contact him over his cellphone or via his friends, they informed the diocese. The diocese and Father Joshi’s family then filed separate reports to police about the missing person.“The diocese tried its best to trace the priest by contacting all his friends, relatives and other possible locations, but failed,” said Father Leslie Moras, diocesan public relations officer.

“We are told that he is in depression but safe with his family."

Police traced the priest and took him back to his home, he said.Neither the police nor the diocese has disclosed any details about the exact location where Father Joshi lived. Police, however, said the priest was picked up from an undisclosed location in state capital Bengaluru.
Related News 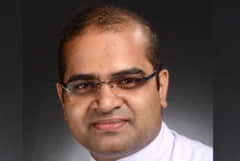 Thank you. You are now signed up to Daily newsletter
Father Joshi used his identity card in Bengaluru to buy a new mobile phone number, which helped them trace his location.“Police tracked this new cell number and located him and brought him back to his family,” said a police official on condition of anonymity.

Father Joshi told UCA News on Aug. 31 that he was under “under tremendous depression and did not know what to do. So I left my parish on Aug. 16 and took shelter in my friend's place” in Bengaluru.

He blamed Bishop Kannikadass Antony William of Mysore for “mentally torturing” him after he signed a letter to Pope Francis seeking action against the bishop for allegedly fathering children and embezzling diocesan money, among other charges.Of some 100 priests in the diocese, 37 urged Pope Francis to remove the bishop from office. They say he is not worthy of the office of a Catholic bishop.The priest also said other signatories to the letter were facing threats and harassment from the bishop to withdraw the complaint.Bishop William, who became a bishop in January 2017, earlier told UCA News that allegations against him were part of a vendetta for transferring priests who held plumb posts against their will.A section of the laity and priests are pressing their demand to remove Bishop William from office.