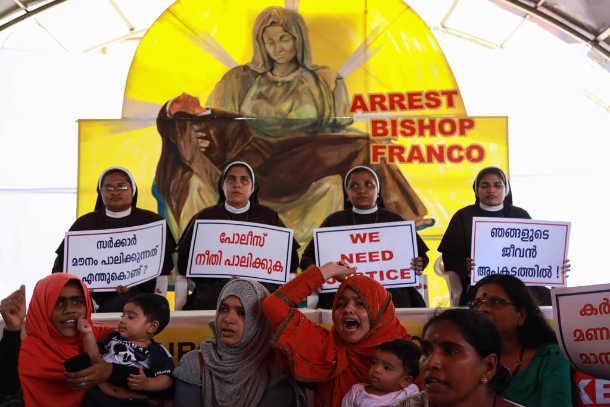 Catholic nuns and Muslim supporters demand the arrest of Bishop Franco Mulakkal outside the High Court in Kochi in Kerala on Sept. 13, 2018. The bishop has been formally charged with rape. (Photo by AFP)

A judicial authority in Kerala has ordered police to provide protection to a Catholic nun, one of 83 witnesses listed against a bishop accused of raping a nun.

The legal authority on April 9 directed police in the southern state to provide protection to Franciscan Clarist Congregation Sister Lissy Vadakkel, considering her as a “vulnerable victim” whose life is threatened after she became a witness in the controversial case.

The nun’s counsel Anil D. Kartha told ucanews.com that the order came in a petition filed by the nun’s brother Jimmy Kurian seeking protection for her.

The protection was sought under a witness protection scheme that India’s Supreme Court established last year. The legal authority in Kottayam district instructed police to provide her with “category A” security.

“It means she is a vulnerable victim who has a serious threat to life and needs maximum protection,” Kartha told ucanews.com.

The order came a day after police formally filed charges of rape against Bishop Franco Mulakkal of Jalandhar based on a complaint of a former superior of Missionaries of Jesus, a diocesan congregation under the prelate.

Her complaint last June said Bishop Mulakkal had raped her 13 times from 2014 to 2016 when he visited her convent in Kuravilangad village in Kottayam district. He has always maintained his innocence.

Sister Vadakkel was among the 25 Catholic nuns named among 83 witnesses in the charge sheet. A cardinal, three bishops and 11 Catholic priests are also named.

Sister Vadakkel has been complaining about the threat to her life and hostility from her superiors since early this year.

In February, she complained to police that after she made a deposition against Bishop Franco she was moved from her Kerala convent and confined in another convent in Vijayawada, some 1,000 kilometres away in Andhra Pradesh state.

She claimed to have “escaped” from there and gone to the congregation’s guesthouse in Kerala. There, she also told media, her superiors have isolated her and denied her medicine and basic necessities in their attempt to make her retract her statement to police.

“She will continue to stay in the guesthouse until an alternative and safe arrangement is made,” said a close associate of the nun.

The police have also been directed to examine the congregation’s order to transfer the nun to Vijayawada.

Sister Vadakkel belongs to Vijaywada province of the congregation and has been living in Kerala for the past 14 years. Her transfer was the congregation’s decision to strictly implement transfer polices, according to regional superior Sister Alphonsa Abraham.

Sister Vadakkel moved court on March 25 seeking police protection and a stay on her transfer order, saying she feared for her life.

The complaint came after her superior Sister Abraham wrote to her ordering her to join the Vijayawada convent by March 31 or face canonical disciplinary action for disobedience.

She can come back to Kerala and “give her testimony when the trial begins,” Sister Abraham told media before the latest order was announced.

Father Augustine Vattoli, a priest supporting the alleged rape victim and other nuns campaigning for her, said the protection order was a “landmark one.”

“It will further strengthen the faith in our democracy and its justice delivery system,” he said.

The Catholic hierarchy, he told ucanews.com, wields influence and it could be used to “force the witnesses to turn hostile and sabotage the case.”

The case has no eye-witnesses or scientific evidence. “It depends only on witness statements and if the witnesses are influenced, justice could never be done. That’s why this is a milestone,” Father Vattoli said.