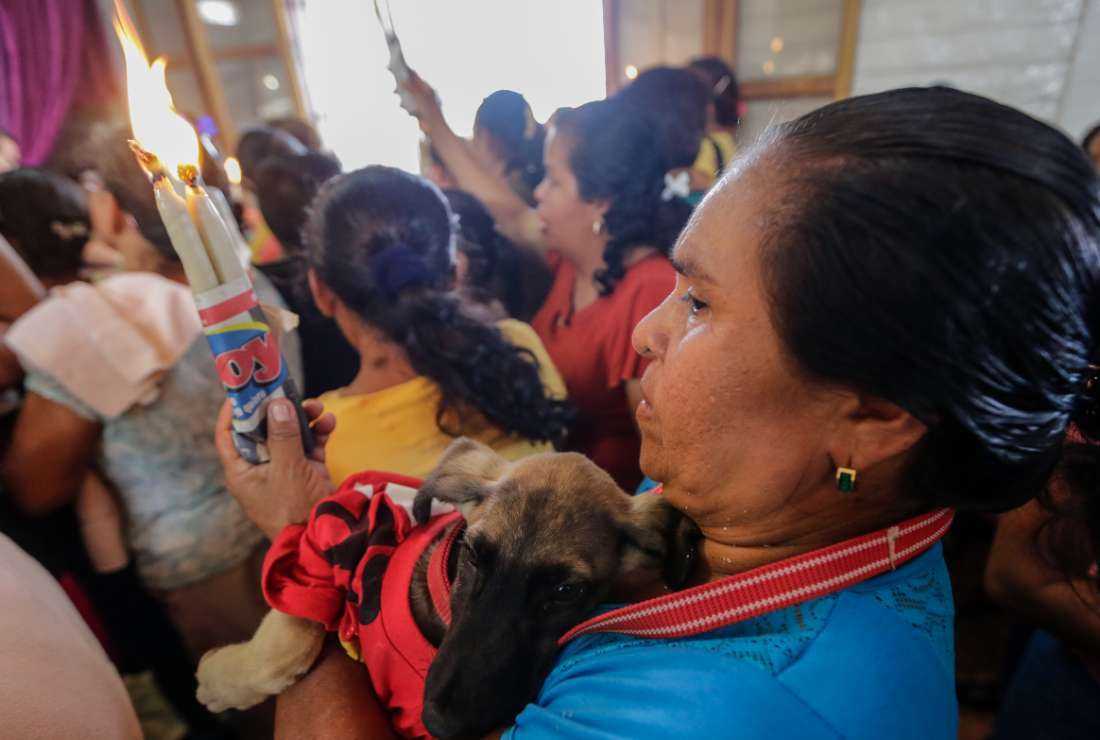 A woman brings her fancy-dressed dog to the church during the Saint Lazarus festival, at the Santa Maria Magdalena parish in Masaya, 30 km south of Managua, Nicaragua on March 13, 2016. (Photo: AFP)

Police in Nicaragua has thwarted the celebration of feast day processions for patron saints in a city considered iconic for the ruling Sandinista regime, which continues increasing its repression of the Catholic Church.

Police have surrounded parishes in the city of Masaya, 18 miles south of the capital, Managua, to prevent parishioners from removing statues of their patron saints and holding processions, according to videos posted on social media.

"It's absurd that the dictatorship sees the religious celebrations of Masaya's patron saints as a threat," tweeted Father Edwing Román, former pastor at the St. Michael the Archangel Parish in Masaya. Father Román has gone into exile.

"This is not an attempt to measure forces. It's allowing Catholics to celebrate," he continued in a tweet dated Sept. 20. "The police, instead of an aggressive attitude, should guarantee security."

Videos on social media showed a police officer informing parishioners of the prohibition on holding a procession, but being jeered by people inside the church. Celebrations of the Eucharist occurred, but not processions.

In a Sept. 17 statement, the Archdiocese of Managua said processions in Masaya to celebrate St. Michael the Archangel Sept. 29 and St. Jerome Sept. 30 would not be allowed "for security reasons."

The statement continued, "We invite the devotees and promisers of the patron saints to keep in mind that faith and devotion are a treasure that we carry in our hearts, and from there we can pay due homage with the strength of that ancestral heritage in our communities."

Nicaraguan President Daniel Ortega's brother died in Masaya in 1978 while fighting troops of dictator Anastasio Somoza; the current president was leader of the Sandinista revolution that overthrew Somoza in 1979.

The prohibition on processions in Masaya continues the crackdown on Nicaragua's Catholic Church, which Ortega's regime has come to see as a political opponent amid a wider attempt at snuffing out all critical and independent voices in the Central American country.

In one of the latest incidents, Bishop Rolando Álvarez of Matagalpa was arrested Aug. 19 in a predawn raid on the curia and accused of "trying to organize violent groups." He remains under house arrest in Managua, while the others arrested with him are being held in El Chipote, a prison notorious for its inhumane conditions.