A protester wears a mask relating to Thailand's lese majeste laws during a Harry Potter-themed anti-government rally at the Democracy Monument in Bangkok on Aug. 3. (Photo: AFP)

Thai authorities appear to be moving against the leaders of student-led pro-democracy protests that have been taking place almost daily for weeks in Bangkok and elsewhere in Thailand.

Police summoned five activists, including Anon Nampa, a 35-year-old human rights lawyer, for questioning on Aug. 5 on grounds that they had violated an emergency decree that forbids large gatherings by organizing the rallies.

The emergency decree was instituted several months ago by Prime Minister Prayut Chan-o-cha ostensibly to stop the spread of Covid-19 and remains in place even though Thailand has had no recorded local transmissions of the virus for two months.

“The government wants the young protesters to observe the laws so that they can continue to exercise their rights to make their demands and the country can stay peaceful,” a government spokeswoman said, adding that it was up to the police to decide whether to charge the protest leaders with crimes.

In addition to violating the emergency decree, Anon is also facing the prospect of being charged with insulting the country’s royal family, which is a crime in Thailand that carries a 15-year prison sentence, by calling for a reform of the monarchy during a Harry Potter-themed protest rally on Aug. 3.

During the event Anon said that the political influence of King Maha Vajiralongkorn needed to be curbed in order for Thailand to become a true constitutional monarchy in line with international norms.

“Talking about [reform] is not an act to topple the monarchy but to allow the monarchy to exist in Thai society in the right way and legitimately under a democratic and a constitutional monarchy,” Anon told some 200 protesters at Bangkok’s Democracy Monument, which has been a popular venue for protests.

Openly voiced criticisms of the monarchy are exceedingly rare, yet in recent weeks many other young Thais have been criticizing the royal family either directly on social media or through oblique messages handwritten on signs carried at demonstrations.

Apiwat Kantong, vice minister of the Office of the Prime Minister, filed a defamation complaint with police against Anon yesterday.

“His speeches infringed upon the monarchy, revered among all Thais,” Apiwat said. “He distorted the truth and made disparaging, mocking and instigating remarks that invited others to criticize the monarchy in a public space.” 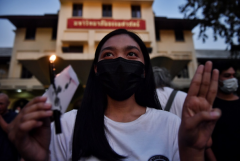 At the same time mercurial army chief Apirat Kongsompong, who is an outspoken royalist, appeared to lash out at student protesters in an address to cadets at a military academy on Aug. 5.

“Covid-19 can be cured, but the disease that cannot be cured is the hatred of the nation,” the general said in a widely reported remark. “We cannot cure people who hate their nation.”

“We do not hate Thailand. We love our country. That’s why we want to have political reform that benefits everyone, not just a few people at the top,” a student protester who studies political science at a prominent Bangkok university told UCA News.

Concerns have been growing that prominent pro-democracy activists could be dealt with by the authorities via extrajudicial means.

In recent years several pro-democracy activists have been attacked and injured in broad daylight by unknown assailants whom activists believe to have been either police or army officers in an attempt to silence them.

At least nine Thai political activists who fled into exile in neighboring countries are thought to have been murdered. The latest was Wanchalearm Satsaksit, who was abducted in Phnom Penh in full view of several witnesses in Phnom Penh in early June and has not been heard from since.

On Aug. 5, a rumor began circulating on social media that Wanchalearm, 37, who had posted lighthearted yet highly critical commentaries of Thailand’s military-allied government on social media, was dead.

However, his sister Sitanan said that she was still hoping against hope that her brother might still be alive despite there being no information on his whereabouts or wellbeing.

“It’s been 60 days since he was gone and there has been no progress on either the Thai or Cambodian side,” Sitanan told a Thai news organization. “Please still use the #Save hashtag with him, don’t use #RIP yet.”

Police spokesman Col. Kissana Phathanacharoen said he had no information of the whereabouts of the missing activist. “I have no idea if he is dead,” he said.

Neither the Cambodian nor the Thai authorities have made much effort to locate the abducted activist, which rights activists say is a clear indication that Wanchalearm was disappeared by influential people in Thailand.