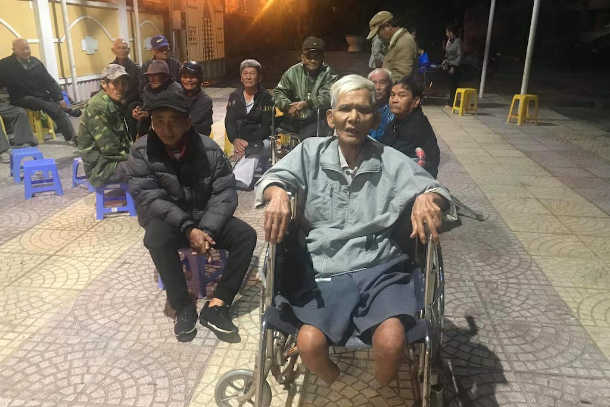 Officials and police in central Vietnam have intervened to stop this year's annual gathering of hundreds of war veterans with disabilities who are supported by local Redemptorists.

More than 260 veterans who fought for South Vietnam over four decades ago attended a special meeting held by Redemptorists and volunteers at Hoa Khanh Church in Da Nang City on Jan. 23.

Many of the veterans at the event lost limbs and loved ones during the Vietnam War which ended in 1975 with the communist North being victorious.

As the gathering began, hundred of police surrounded the church while a security officer ordered an MC to stop introducing the program, turned off an amplifier and forced organizers to pull down a banner that featured pictures of two soldiers carrying an injured comrade, as well as images of other disabled veterans' gatherings held by Redemptorists.

Plainclothes officers filmed attendees and asked veterans to show their identity cards. The veterans hailed from five central provinces. Many took buses to the venue and didn't arrive until hours after midnight.

"The government seems to disagree with this event, so we should obey (its order)," Father Hien said.

He said the charitable program for veterans has been running for years, with himself and other Redemptorists working together to provide them with gifts at this special time of year.

He comforted nervous ex-soldiers by promising that he would pull down the banner at the authorities' request so as not to cause any friction.

Despite what occurred, the veterans were still given pieces of cake, cartons of milk and 2 million dong (US$86) each before they left the venue.

Priests had planned to spend time interacting with the veterans as many are socially isolated, but they said the state's intervention made this difficult.

Redemptorist Father Joseph Dinh Huu Thoai, who is in charge of working with veterans from the central provinces, said the move had soured the government's reputation in the eyes of local people in Da Nang.

The veterans already live in extreme poverty and have suffered from discrimination and neglect for decades, so treating them badly was unlikely to win Hanoi many new friends, he said.

"We have been striving each year to hand them gifts of love and show them some human dignity, which they have been long deprived of," he said.

He said about 800 veterans from the central provinces have registered with the program launched by the Redemptorists in 2013.