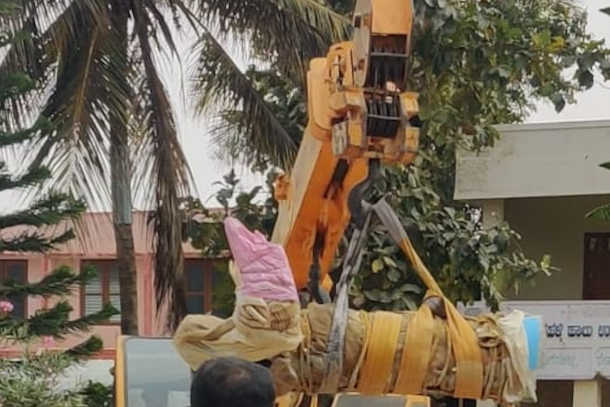 A statue of Jesus Christ is removed by a crane from a Christian burial place in Karnataka state on March 2. Christian leaders say the government acted under pressure from right-wing Hindu groups. (Photo supplied)

Police and revenue officials have removed a statue of Jesus Christ and 14 crosses from a Christian burial place in southern India's Karnataka state following allegations of Christians encroaching on government land.

Church officials have denied the allegations and said the administration acted under right-wing Hindu pressure to remove the religious pieces from Mahima Betta hillock in Doddasagarahalli village.

“The forceful removal of the statue of Lord Jesus from our legally allotted burial ground” was “unacceptable and has greatly shocked” Christians in Karnataka, said Archbishop Peter Machado of Bangalore, which covers the area.

Catholics have been using the 4.5 acres of land for burial and Lent practices such as Way of the Cross for more than three decades without any objection from local people, said Father Cyril Victor Joseph of the archdiocesan media commission.

“It was legally given to the Church by the government. We have documents to prove the ownership,” he told UCA News on March 4. “It is unfortunate that officials pulled down the statue and crosses without even allowing to hear us.”

The officials came without notice to remove the 3.7-meter statue and crosses, he said.

Police acted following allegations of right-wing Hindu groups that Christians had encroached on the land and indulged in conversion activities, the priest said.

The state government is run by the pro-Hindu Bharatiya Janata Party (BJP), which is accused of supporting Hindu groups who have pledged to make India a Hindu-only nation.

“It is unfortunate and regrettable that the police, bowing to the pressure of a few outsiders, have forcefully removed the statue of Lord Jesus,” Archbishop Machado’s statement said.

The government can investigate and see if there was even one case of conversion. But officials should not “interfere in the religious practices of Christians by yielding to the pressure of some groups,” he said.

The statue removal “is a blow to the communal harmony of the people in our villages and also a violation of the religious freedom guaranteed to us by the Indian constitution,” he said.

Archbishop Machado said villagers told officials that they had “no problem” in Christians having prayers on the hillock but police were acting on the insistence of a few outsiders.

He also sought Christians’ prayers for those who have “desecrated” the religious items and asked them to use the same words of Jesus Christ: “Father, forgive them, for they do not know what they are doing.”