Six people hurt in 'an attack by militants on Bengali culture' 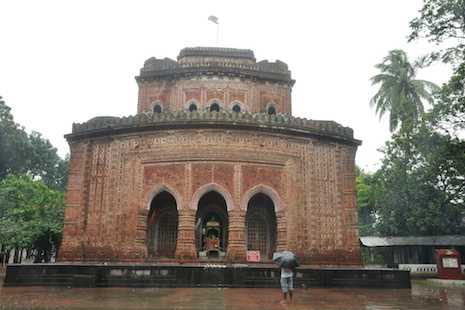 The 18th-century Kantajew Temple in Dinajpur district. Several crude bombs exploded during a Dec. 5 festival at the temple. (Photo by Stephan Uttom)

Police have detained six people over a Dec. 5 bomb attack on a Hindu temple in northern Bangladesh, which left at least six people injured.

At least three crude devices exploded as some 1,500 people, mostly Hindus, gathered to watch a yatra (open-air folk opera) at the Kantajew Temple in Dinajpur district, 415 kilometers north of the capital Dhaka.

The opera was a part of a month-long religious and cultural program celebrating Rushmela, an annual Hindu festival honoring the Hindu god Krishna and goddess Radha.

"Six people were injured by bomb splinters. They are out of danger now," said Mizanur Rahman, additional superintendent of police in Dinajpur.

"We have detained six people for questioning. We have yet to determine the motive and identify the perpetrators behind the attack," he said.

No one has claimed responsibility for the bombings.

Once-considered a moderate Sunni-majority country, Bangladesh has seen a rise in religious violence in the past few years.

Four secular bloggers and a publisher were killed in machete attacks allegedly by Islamic militants this year, while more than a dozen Catholic and Protestant priests claim to have received death threats in recent weeks.

Deadly attacks have also targeted minority Shia Muslims and foreigners. An Italian aid worker and a Japanese man were shot dead, while a Protestant pastor and an Italian Catholic priest narrowly escaped death.

Hindu leaders say the attack on the temple was connected to the recent sectarian violence and threats.

"The attack on the temple is a continuance of attacks on freethinkers, bloggers, Shia Muslims, and religious leaders. This is not just an attack on the Hindu community, but on Bengali culture," said Rana Dasgupta, a lawyer and secretary of Bangladesh Hindu Buddhist Christian Unity Council.

"It's time for all people in Bangladesh to rise against religious fundamentalism," he added.

Sectarian violence against minorities is a matter of grave concern, Bishop Sebastian Tudu of Dinajpur said.

"We are worried the extremists are targeting religious minorities one by one. The attackers want to destabilize the country by inflicting fear among minorities with targeted violence against them," Bishop Tudu said.

"The government should take steps to find and punish the attackers," the prelate added.