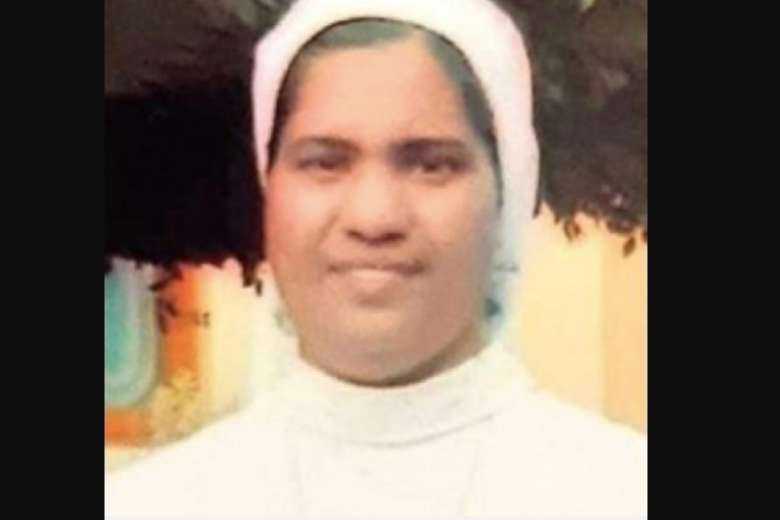 Sister Jaseena Thomas, a member of the Missionary Congregation of the Daughters of St. Thomas. Her body was found in a quarry in Ernakulum district of Kerala state on Feb. 14. (Photo supplied)

Police are investigating the death of a Catholic nun whose body was found in an abandoned quarry filled with water in southern India's Kerala state.

The body of Sister Jaseena Thomas, a member of the Missionary Congregation of the Daughters of St Thomas, was found floating in the quarry in the Vazhakkala area of Ernakulum district on Feb. 14.

The body was taken for a post-mortem examination and will be buried on Feb. 15. The autopsy report has not been released to the media.

The 45-year-old nun was under medication for a mental illness that she developed 10 years ago, according to her congregation.

Church officials ruled out any foul play in her death, suggesting it to be a case of suicide.

“Sister Thomas was suffering from a certain mental illness after she and another nun met with a road accident 16 years ago in which her companion died on the spot,” said Sister Jessy Jose, superior of the congregation’s Pala Province.

In 2004, while Sister Thomas and her companion were waiting for a bus, a speeding vehicle went out of control and hit her companion, who died in front of her instantly.

“This tragic incident devastated her mentally and she began to show signs of mental disturbance. For the past 10 years she has been undergoing medical treatment for mental illness,” said a release from the congregation.

The nun exhibited suicidal tendencies in 2009 and 2011. Her family were informed of her condition. She also spent some time at her home as part of her treatment, said the Feb. 15 release.

The nun, according to the official communication, was last seen at breakfast time but did not come for lunch. Her companions then started a search for her in the convent.

When they failed to locate her, they reported her absence to the police. A police search found her body floating in the quarry around 6pm.

“Please do not spread rumors through social media and other platforms,” pleaded the congregation’s release.

The case needs detailed investigation, according to Riju Kanjookaran, the convener of Save our Sisters (SOS), a laity forum that supports Catholic nuns in distress.

He questioned the congregation’s stand that she was mentally ill, saying the nun was working in a church-run mental health center as a nurse. “If she was really ill, how could she be permitted to work as a nurse?" he asked.

Secondly, the quarry was very deep and the nun's body could not have floated for so long, Kanjookaran said.

The lay Catholic leader also claimed the nun’s family were unaware of her illness.

The nun’s family refused to respond to the claims.

Each time a nun dies under mysterious circumstances, Kerala society is divided, with a section of people instantly suspecting foul play.

Such criticism increased after the Church was accused of hushing up the murder of 19-year-old Sister Abhaya in 1992. Her body was found in a convent well.

Sister Abhaya’s case also was initially dismissed as suicide but after decades of investigation following public pressure, a trial court last December convicted a Catholic priest and a nun of murdering her.

The priest has challenged his conviction in Kerala High Court and the nun is expected to do the same.

India has witnessed more than 20 such mysterious deaths of nuns in the past three decades. But except for Sister Abhaya's case, most cases were dismissed as suicide without any serious investigation.