Indonesian purges in which 500,000 people died still a hot topic more than 50 years on 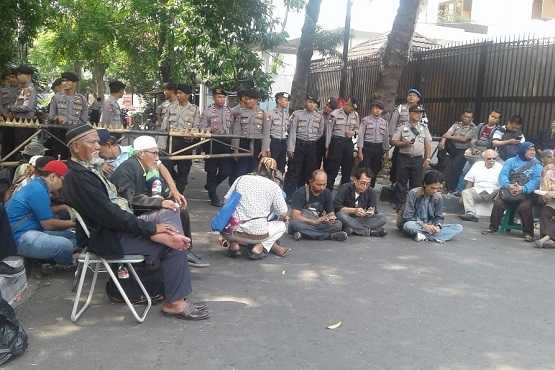 People wanting to attend a forum on the 1965 communist purge are blocked from entering the venue at the Indonesian Legal Aid Foundation by police. (ucanews.com photo)

Indonesian police and Muslim groups have broken up a forum to discuss events during a deadly purge on communists more than 50 years ago, sparking outrage among activists and victims.

Police moved in to stop the Sept. 16-17 event in Jakarta, while members of Muslim groups including the Muslim Students Alliance and Islamic Defenders Front pelted participants with stones at the venue.

Police initially said the seminar was illegal because organizers did not have a permit to stage the event but admitted that they had bowed to public pressure.

The 1965 communist purge in which more than 500,000 people were believed killed after seven army generals were murdered remains a sensitive issue in Indonesia.

China is accused of being behind the generals' murders while those responsible for the later massacres have never been held to account, activists and victims' families say.

"We must fix our history. China has always been accused as the culprit behind the bloody events. That is a hoax, a fabricated story," said John, a Chinese man who wanted to attend the seminar and who only gave his first name.

Since the massacre, anti-Chinese sentiment has remained. The case of former Jakarta governor Basuki Tjahaja Purnama, an ethnic Chinese Christian who was jailed for blasphemy, is an example, he said.

"We as a minority ethnic group became victims of the communist stigma," he said.

An organizer of the Muslim groups who attacked the seminar organizers said communism has no place in Indonesia.

"We stopped this event because communism will damage this country," said Ullah, who like many Indonesians goes by one name.

"We did not want any people to become victims of violence," he said.

Bedjo Untung, a Catholic and a victim of the 1965 purge, said he was disappointed the seminar was not allowed to take place.

"I'm disappointed because democracy has died," he told ucanews.com.

Event organizer, Boni Setyawan, refused to back down and said he will reschedule the event.

"There is a distortion of history so this seminar needs to straighten out history. In the end, reconciliation must be established between victims and anti-communists," he said.