The replica for a movie set near a temple offended Hindu pride, say attackers on social media 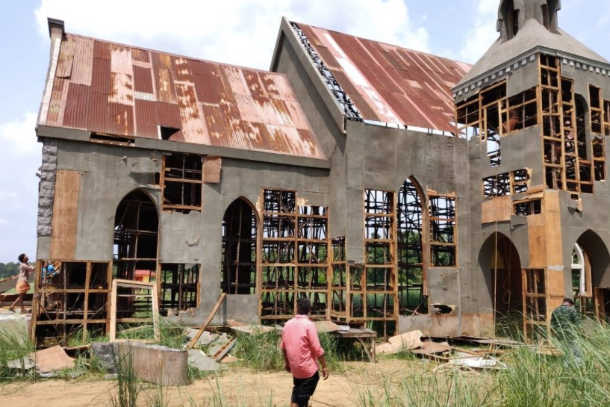 An image of the church replica posted after vandals attacked it, saying a church near a temple offended their Hindu sentiments. (Photo from Facebook page of Hari Palode)

Police in Kerala are searching for 50 members of a Hindu right-wing organization accused of vandalizing a replica of a church that had been erected for shooting a movie near a Hindu temple.

Police arrested two people in connection with the case on May 25 and are on the lookout for some 50 people involved in the act. They are accused of vandalism and attempting to create a riot, police inspector K. Karthik told media on May 26.

Leaders of civil society and religious groups have condemned the violence as intolerance and an attempt to spread religion-based discrimination and hate.

The church replica was erected for shooting a Malayalam movie in March. A nationwide coronavirus lockdown launched in India on March 25 delayed the shooting.

The replica “insulted Hindu sentiments” as it stood near a famous temple on the banks of the Periyar river in Kalady, said a social media post by Hari Palode, who claimed to have led the vandalism.

The vandals used hammers and iron rods to destroy parts of the replica and uploaded the pictures to social media on May 24.

Palode introduced himself as the president of Atharashtra Hindu Parishad (international Hindu forum). He said the replica was erected despite their warning against it.

“We don’t have a habit of pleading, so we decided to demolish it. We have to protect our self-respect,” he wrote in Malayalam, the language of Kerala state.

Kerala’s Chief Minister Pinarayi Vijayan condemned the vandalism and promised police action at a press conference on May 25.

“Such incidents have no place in Kerala,” said Vijayan, a leader of the state’s communist party, which leads the ruling coalition.

Father Antony Thalachelloor, spokesperson of the Eastern-rite Syro-Malabar Catholic Church, condemned it as “an act of communal hatred.”

“We have not seen such deep-rooted communal hatred in our state until now. It is a matter of serious concern that they could not tolerate a structure that resembles a church,” he said.

The vandals also showed their nerve by uploading videos of the brazen act on social media as something heroic, said Father Thalachelloor.

Filmmaker Basil Joseph said the movie set cost him US$21,000. He said they had permission from the police and land-owning temple committee to erect the movie set.

“This may be a joke, a troll, political or publicity move for someone. But for us, this was a dream. Until a few days ago, when we used to look at the photograph of the set, we used to feel proud,” he wrote on his social media forum.

Hindu fanatic activities have increased across India since the pro-Hindu Bharatiya Janata Party (BJP) came to power in 2014. Critics say the BJP’s political victory has emboldened Hindu groups to press on to make India a Hindu-only nation.

The BJP and its partners run governments in 16 of the 29 Indian states, but the party has not been able to make any political headway in Kerala.