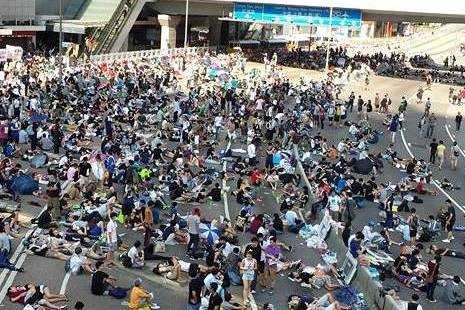 By AFP with ucanews.com reporters

Hong Kong protesters defied tear gas and thronged the streets in their thousands Monday after overnight clashes with police, paralyzing parts of the city as they demanded Beijing allow unfettered elections.

The rare scenes — in which crowds faced down riot police in the worst unrest since the handover to China in 1997 — brought widespread disruption as commuters struggled to make their way to work and many schools and businesses remained shuttered.

Protesters have defiantly stuck to their demands for full universal suffrage after Beijing last month said it would allow elections for the city's next leader in 2017 but would vet the candidates — a decision branded a "fake democracy".

As morning broke over the city, thousands of protesters remained in control of at least three major thoroughfares, with a significantly reduced police presence after hours of tear gas and running battles.

Many tried to snatch some sleep where they could, fearful that the police might return at any moment.

"We are more confident now. The police don't have enough officers to close down the districts where there are protests," Ivan Yeung, a 27-year-old who works in marketing, said after a night camped out in the busy Causeway Bay shopping district.

Hong Kong Federation of Catholic Students issued a statement criticizing what they said was the police’s excessive use of violence when dispersing “unarmed students”.

Cardinal John Tong of the Archdiocese of Hong Kong also issued an urgent appeal for calm from authorities and protesters.

"With reference to the regrettable events at Central, Admiralty and Wanchai over the past few days, may I sincerely call upon the Hong Kong SAR Government to put the personal safety of fellow citizens as her prime concern, exercising restraint in deployment of force with a view to listening to the voice of the younger generation and of citizens from all walks of life," Cardinal Tong said in a statement issued on Monday.

The clashes marked a dramatic escalation of protests in the city, which rarely sees such unrest, after a tense week of largely contained student-led demonstrations exploded into mass angry street protests.

Students have boycotted classes in the past week, which saw the central government complex stormed, with pro-democracy group Occupy Central on Sunday bringing forward a mass civil disobedience campaign that had been due to start on October 1.

Demonstrators have decried the police's use of tear gas — the first in the city since anti-WTO protests in 2005 — but the authorities have defended their conduct, calling the ongoing protests unlawful.

"I am appealing to the people that are blocking the streets to leave peacefully as soon as you can, to not allow the daily lives of Hong Kong people to be disrupted by blocked traffic," he said.

He also quashed rumors circulating on social media that city authorities planned to call in the People's Liberation Army, which stations a garrison in the city.

"There is absolutely no proof of this," he said.

But the protest leadership showed little sign of backing down.

"Anyone with a conscience should be ashamed to be associated with a government that is so indifferent to public opinion," Occupy said in a statement Monday.

Protesters are demanding that Leung step down and that Beijing rescind its decision last month that anyone standing for election to the city's top post in 2017 must be vetted by a loyalist committee first.

For commuters in the already densely populated and congested city, the ongoing protests brought widespread disruption.

More than 200 bus routes were canceled or diverted as well as large sections of the city's tram networks. The underground railway was operational but exits at several subway stations in key areas were closed.

Witnesses in Mongkok — one of the most densely populated suburbs of the city and the site of a second protest across the harbor in Kowloon — saw angry confrontations between protesters and members of the public frustrated at the disruption.

On Sunday evening, trains on the Mass Transit Railway were not stopping at Admiralty Station, close to the city’s government offices and a key site for the protests.

When a train driver reminded passengers to alight one stop earlier, he also wished passengers “good luck”— a gesture that elicited cheers, many of whom were carrying medical supplies in response to protest organizers’ appeals.

Late on Sunday, Cardinal Joseph Zen, Hong Kong’s former Bishop and a supporter of the protests, appealed for calm.

“The rally today has already given a strong and very clear stance on fighting for a fair electoral system,” he told media. “But in the face of an irrational and totally indifferent regime, there is no treason to insist to talk to them with reason.

At least 41 people had been treated in hospital for injuries, RTHK reported.

Officers have so far made 78 arrests for offenses ranging from forcible entry into government premises, unlawful assembly, disorderly conduct in public place and assaulting public officers.

Former colonial power Britain handed Hong Kong back to China in 1997 under a "one country, two systems" deal that guarantees liberties not seen on the mainland, including freedom of speech and the right to protest. AFP