Police crack down on peaceful protest in Thai capital 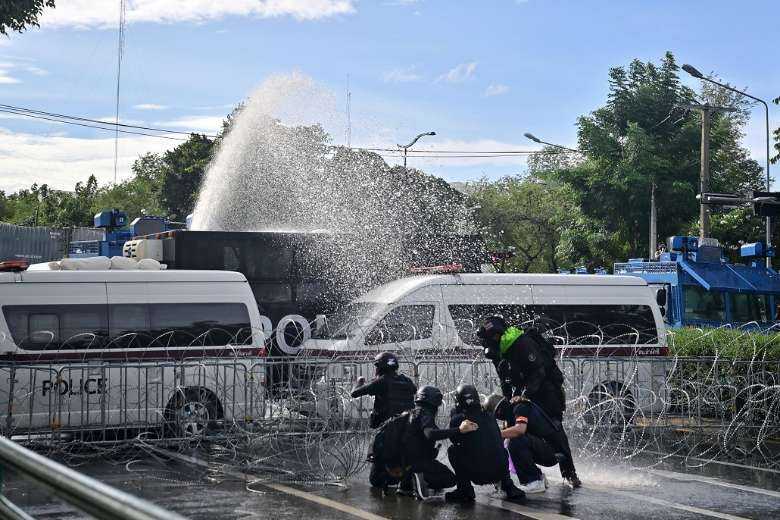 Thai authorities responded with force against peaceful protesters who gathered in Bangkok to demand that Prime Minister Prayut Chan-o-cha resign over his handling of a coronavirus outbreak that has plunged the country into an economic and health crisis.

About 2,000 police in riot gear fired rubber bullets, high-powered jets of water and tear gas at a large crowd of demonstrators in the Thai capital on July 18 after some protesters tried to dismantle barricades set up to prevent them from marching to Government House.

Several people were injured during the forceful police response, which was widely condemned on social media as excessive.

Earlier, the government of Prayut, a former army chief who seized power in a coup in 2014, passed a decree prohibiting any public gathering and threatened anyone who showed up to protest with two years in prison.

However, these threats did not deter thousands of mostly young Thais from taking to the streets to call for Prayut to resign after his government’s disastrous response to a countrywide outbreak of Covid-19 which has seen nearly 400,000 people get infected and more than 3,200 die.

The vast majority of infections and deaths have taken place since April, yet despite the mounting rates Prayut’s government has barely managed to vaccinate more than a mere 5 percent of the country’s 69 million residents so far.

The shambolic mass vaccination drive, which has been beset by chronic shortages and haphazard distribution, has caused his government’s already low popularity to plummet further, with more and more Thais taking to social media to vent their anger at their government.

At the same time, routinely amended lockdown measures, which have failed to slow the spread of the virus in a meaningful way, have caused widespread economic hardship across Thailand, especially affecting low-income earners.

Millions have been unemployed for months and numerous small businesses have been forced to close down indefinitely even as Thailand’s struggling economy is expected to shrink this year, according to experts.

Yet despite their mismanagement of the pandemic, Prayut and his ministers have failed to apologize or offer any hope of improvement in their performance in the coming weeks, which could prove critical in what further toll the pandemic will take on people’s health and livelihoods.

“The government has been poor at managing the situation and if we don’t do anything there will be no change,” a 34-year-old protester told Reuters news agency.

Other demonstrators voiced similar views in interviews with a UCA News reporter.

“Thai people have been suffering. They have been losing hope and it’s not because of the virus but because of Prayut and his people,” said a young woman who carried a sign that said “Prayut Out!”

“They [the members of the government] are power-hungry people and very incompetent,” she added. “They care only about themselves and rich people.”

Protesters burned effigies of the prime minister to loud cheers. Some also carried a mock-up body bag around to signify the death of democracy in Thailand as well as the deaths of those thousands who have lost their lives to Covid-19.

“Thai people are demanding vaccines from the government but [the authorities] resort to violence in response,” one protester said. “We Thai people may die more because of our fraudulent leaders.”