Thai pro-democracy protesters confront riot police in Bangkok on Feb. 1 in an area where Burmese migrants were demonstrating after Myanmar's military staged a coup. (Photo: AFP)

A phalanx of police in riot gear violently dispersed a group of Burmese and Thai pro-democracy demonstrators gathered outside the Myanmar embassy in central Bangkok on Feb. 1 in protest at a military coup in Myanmar.

Armed with batons and shields, some 150 officers shoved scores of protesters back at around 5pm in order to clear the area despite the demonstration having been entirely peaceful.

Some of the protesters responded by throwing missiles, including rocks, at police. In the ensuing melee, several people were injured, including some protesters and a photographer.

Earlier in the day, hundreds of people gathered outside the embassy with signs and bullhorns to call on the military in Myanmar to restore power to a democratically elected government.

The Tatmadaw, Myanmar’s military, ousted a government headed by democracy icon Aung San Suu Kyi the same day, claiming that last year’s parliamentary elections, in which the military lost overwhelmingly, were null and void because of electoral fraud.

Suu Kyi and several leaders of her National League for Democracy party were detained and the army declared a year-long state of emergency in what observers have called a blatant power grab.

Although numerous governments have condemned the military takeover in Myanmar, the administration of Thai Prime Minister Prayut Chan-o-cha, a former army chief who himself seized power in a coup in 2014, has refused to do so.

Deputy Prime Minister Prawit Wongsuwan, another former army general who participated in the coup of 2014, said the military takeover in Myanmar was “an internal affair,” which was “their business.”

Thailand’s Ministry of Foreign Affairs has in turn issued a mildly worded statement in response to the coup in Myanmar.

“Myanmar is a close neighbor of Thailand and an important member of ASEAN,” the ministry’s spokesman Tanee Sangrat said. 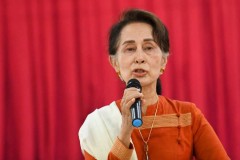 “Thailand hopes to see continued peace and stability in Myanmar, and that the current situation be resolved peacefully and returned to normalcy soon for the benefit of the people of Myanmar.”

A young Thai pro-democracy activist who participated in the rally outside the embassy said she was not surprised the Thai government would appear to side with the Tatmadaw.

“They [the Thai and Burmese top brass] are like brothers and cousins,” she told UCA News. “They think the same and act the same. They don’t care about the people and want to have power only for their own benefit.”

Many Thai pro-democracy activists have taken to social media to condemn the military in Myanmar.

We Volunteer (WeVo), a Thai pro-democracy group that helped organize the anti-coup protest at the embassy, has been unequivocal in its stance against the coup.

“Thailand must not endorse and legitimize this coup or the [resulting] government,” the group said in a statement. “We affirm that as a member of ASEAN we cannot stay silent after such an evil and unlawful act.”