Catholics face crackdown after praying for resolution of land disputes

The Catholics, who came from the nearby Mekong Delta area to pray for the resolution of land disputes before a statue of the Virgin Mary, were beaten, dragged on to buses by police and security agents and had their mobile phones confiscated.

“This was a peaceful gathering of religious believers at a legally recognized venue,” said Mervyn Thomas, chief executive of the Christian rights group.

The Vietnamese-language blog Dan Lam Bao said the protesters had gone to the southern city from neighboring provinces in the hope of resolving the disputes and reclaiming land and property they say were seized by local authorities.

Reports of land-grabs across Vietnam have escalated in recent years with authorities accused of selling off land to private developers at the expense of residents.

CSW said that land seizures have also affected the Church which has put forward claims for land and property confiscated in the 1950s when Vietnam was fighting a war of independence against France. 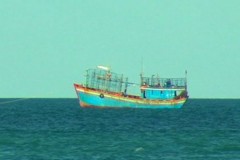