Pham Thi Doan Trang was always aware that she could be arrested at any time. (Photo: Facebook)

Police in southern Vietnam have captured a famous blogger and rights activist who has been praised for bravely struggling for democratic freedom and accepting persecution.

The Public Security Ministry announced on Oct. 7 that police arrested Pham Thi Doan Trang and searched her boarding house in Ho Chi Minh City. Trang is accused of campaigning against the state and spreading information and documents against the communist government. The Hanoi resident will be detained for four months as her case is investigated.

Le Nguyen Huong Tra said police arrested Trang at midnight of Oct. 6 while she stayed at a boarding house in the city.

“I am not surprised at my friend’s arrest after she published reports on the lethal land clash between police and farmers in Dong Tam Commune,” Pham Thanh Nghien, Trang’s close friend, said. The clash claimed the lives of three police officers and farmers’ leader Le Dinh Kinh.

Nghien, a Catholic mother of one, said Trang’s arrest, which came when delegations from Vietnam and the US were holding their 24th annual human rights dialogue via virtual sessions on Oct. 6-7, showed that the Vietnamese government refused to respect human rights.

Nghien said she and Trang had recently presented human rights violations to diplomats from the US consulate in Ho Chi Minh City and they also told them that Trang and others could be detained by the government after the controversial Dong Tam trial and before the National Party Congress early next year.

She said Trang’s 80-year-old mother Bui Thi Thien Can stood silently and said nothing after she informed her about her daughter’s arrest.

Nghien, a former prisoner of conscience, said Trang has not been able to meet her mother for the past three years as she was followed by police while her mother was threatened.

She said the war ended in the Southeast Asian country 45 years ago but many people still have to be away from home or lose their relatives, and could not visit their homes.

Trang is the author of many banned books on politics, non-violent protest and how to work with police. Her latest, Dong Tam Report, tells the truth behind the deadly land clash between farmers and police early this year on the outskirts of Hanoi. Two of the farmers were sentenced to death in September. 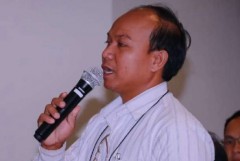 Trang, who had to regularly move her shelters in different places to avoid massive police hunts, was always aware that she could be arrested at any time. “I am writing under the gallows,” she wrote.

She was brutally beaten by security officers many times. They wounded her limbs and head.

Will Nguyen, a right advocate, posted a letter titled “If I am imprisoned” that Trang had sent him and asked him to publish it after her arrest.

“No one wants to sit in prison but if prison is inevitable for freedom fighters and if prison can serve a predetermined purpose, then we should happily accept it,” Trang said in her letter dated May 27, 2019.

The writer called on activists to fight for new laws to reform Vietnam’s electoral process and National Assembly. She wants national elections to be held freely and fairly.

She asked them to encourage the public to read her books including Cam Nang Nuoi Tu (A Handbook for Families of Prisoners) and Phan Khang Phi Bao Luc (A Handbook for Freedom Fighters), published by the Liberal Publishing House, Vietnam’s only independent publisher.

She called for a massive social movement that forces the government to free her and approve new election laws, adding they should remember her as a writer who makes contributions to educating people about the value of freedom and democracy.

Trang asked activists to look after her mother and protect her siblings who are threatened by police.