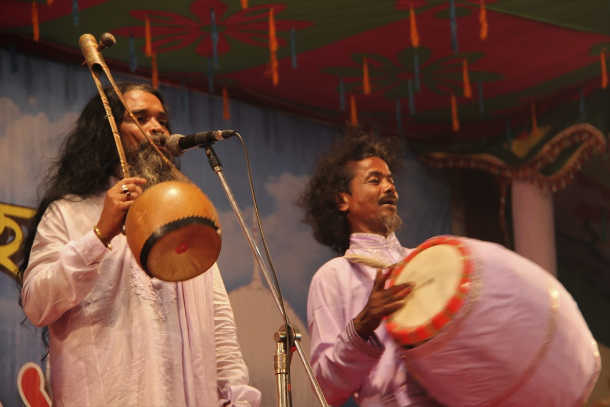 A “baul” (mystic singer) performs during a festival in Kushtia district of Bangladesh in this 2016 file photo. A popular folk singer has been arrested for allegedly hurting religious sentiments of Muslims. (Photo by Stephan Uttom/UCA News)

Police in Bangladesh have arrested a popular folk singer for allegedly hurting the religious sentiments of Muslims following comments he made at a recent concert that triggered protests from conservative groups and a lawsuit by an Islamic cleric.

Shariat Sarker, 40, was detained by police in Mirzapur, in Tangail district on Jan. 11, under a controversial cyber law that is often criticized for being a tool for muzzling dissent and curtailing freedom of speech in this Muslim-majority country.

Sarker, a boyati (folk singer) and a Muslim himself, was accused of making hurtful religious comments during a show on Dec. 24.

A video of the show was uploaded on YouTube and went viral on social media, sparking outrage among conservative Muslim groups.

Sarker was accused of ridiculing Muslims and Islamic clerics who claim cultural activities such as music and dancing are “un-Islamic.”

“Nowhere does the Quran say music and dancing are haram [un-Islamic]. Prophet Daud [King David] was a boyati (singer) and he knew how to play 23 types of musical instruments. Our great Prophet Muhammad was an ardent fan of music and went to sleep at night after listening to music. Some Islamic clerics are ignorant and interpret the Quran wrongly, and propagate music as haram,” Sarker reportedly said.

If found guilty, Sarker could face up to 10 years in jail.

“In recent times, we have seen freedom of speech under threat and now with the DSA being exploited by people, the right to free speech faces further threats. The arrest of a popular folk singer for expressing his opinions is unacceptable and a violation of his constitutional rights,” Kamal told ucanews.

His arrest shows the government is appeasing radical elements in our society, she said.

“Shariat Sarker should be released immediately and controversial sections of the DSA should be changed, so they cannot be abused further,” she added.

Indian Jesuit Father Srijon Das, who studied folklore and is a Baul (mystic singer) called Sarker’s arrest “unfortunate” and “an attack on culture.”

“I have studied the Quran and nowhere does Islam forbid music specifically. Everywhere Islam went, it embraced the cultures and traditions including music. It embraced the Sufi and Baul music of Bengal and Bangladesh because they were deeply embedded and part-and-parcel of communities. The arrest of this boyati is unfortunate and amounts to an attack on Bengali culture,” Father Das told UCA News.

“It is unacceptable when we see the authorities paying heed to those who interpret the Quran and Islam wrongly and mislead people,” he added.

In our country, most people don’t have great knowledge about religions and religious teachings, so can be easily led astray when told things that are not true, he said.

“This ignorance coupled with an intolerant mindset poses dangers for liberalism and harmony in society,” Father Sen told UCA News.

“There must be state-backed and private initiatives to offer better religious teachings to the masses, so they are ready to accept what it true, even if they don’t like it. Moreover, the state must ensure freedom of speech is not threatened by controversial laws,” the priest added.

Bangladesh, long known as a moderate Muslim-majority country, has seen a rise of Islamic radicalism and militancy since 2013.

Folk singers have also been physically attacked by radical Muslims due to Islamic clerics branding them as “heretics” and their activities “un-Islamic.”