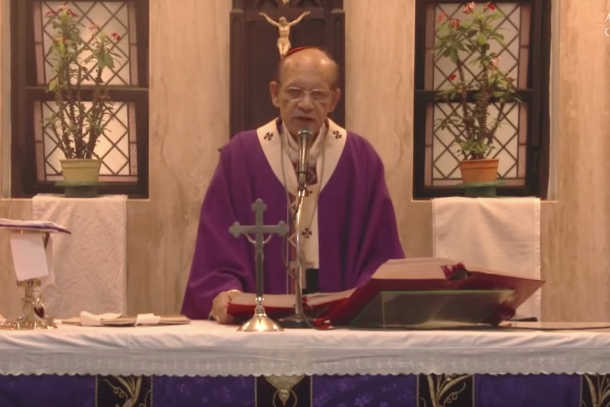 Cardinal Oswald Gracias of Mumbai, president of the Indian bishops' conference, officiates a private Mass that was livestreamed on March 29 amid a Covid-19 lockdown in India. Two priests who violated the lockdown to hold a Mass in a seminary with other people were arrested in Kerala on March 29. (Image: screengrab)

Police in Wayanad district charged the seven, including two seminarians, for violating a government order to stop all public activities and close down religious places of worship during the 21-day lockdown period ending April 14.

Police released all seven after recording their arrest inside the minor seminary of the Congregation of Missionaries of Faith, where they had gathered for the Mass. The seminary functions in Mananthavady Diocesan area.

It was the second such incident of police arresting priests for violating prohibitory orders and celebrating Mass since Indian Prime Minister Narendra Modi imposed the lockdown on March 24. Father Manoj Kakkonal, who heads the media commission of Manathavadi Diocese, told UCA News on March 30 that the arrest "seems to be a case of misunderstanding."

Police arrived after some neighbors, who saw the nuns arriving for the Mass, informed the police as "if so many persons were attending the Mass," Father Kakkonal said.

"The police initially found nothing wrong. However, they later recorded their arrest and released them with a warning against repeating it," the priest said.

On March 23, police in Trichur district in Kerala arrested Father Paul Padayatti from his Our Lady of Perpetual Help Church in Koodapuzha village after he officiated a requiem Mass for more than 100 people, violating the prohibitory orders of the state police.

The priest was taken to a police station and released after he tendered a written apology.

The state also reported two other incidents of police warning priests for defying government orders and conducting prayers including Masses.

The cardinal, also the president of the Kerala Catholic Bishops' Conference, also appealed to Catholics to adhere to government guidelines and remain inside homes during the lockdown period.

Against the backdrop of restrictions put in place to contain the spread of the Covid-19 pandemic, "it is decided that the rites of the Holy Week be celebrated without the presence of the faithful," said the cardinal's March 28 circular.

"The bishops may celebrate the liturgies in the cathedral and the priests in their respective parishes. However, care should be taken that there are not more than five persons present at any time," he cautioned.

Cardinal Alencherry also urged bishops and priests "as far as possible" to do livestreaming of their liturgical celebrations for "the benefit of the faithful."

The Chrism Mass was also suspended but may be held later, "maybe in connection with the Feast of Pentecost," he said.

There will be no Easter Vigil liturgy. Instead, "it will be done in the morning, that too without the participation of faithful," the cardinal noted.

He also urged believers to observe Holy Week as a "time of incessant prayers in families."

Catholics are urged to read the Scriptures, praying the Office of the Hours, Way of the Cross and such prayers during the passion week.