Ambroncius Nababan (front left) speaks to the media after a police complaint was filed against him by Papuans for uploading allegedly racist posts against a Papuan activist on social media. (Photo: YouTube)

Indonesian police have arrested a politician for allegedly making racist slurs against a Catholic Papuan human rights activist amid concerns the comments could spark widespread protests.

"He was charged after undergoing questioning," Yuwono told media.

Nababan, a former MP candidate and chairman of a volunteer group supporting Indonesian President Joko Widodo, posted a photo on Facebook of Pigai next to a gorilla along with a caption criticizing the activist’s opposition to the Chinese-made Covid-19 vaccine Sinovac.

"We apologize profusely. The Sinovac vaccine is made for humans, not for gorillas," the caption said.

He also posted another photo with a caption in which a gorilla tells Pigai: "Our vaccine is not Sinovac, but a rabies vaccine."

Nababan has admitted uploading the posts and apologized to Pigai.

He said he did not intend to make racist remarks against the Papuan people but only wanted to criticize Pigai's opposition to the vaccine.

"Its nature was satirical. It was not intended to insult people, let alone insult ethnicity, religion or the Papuan people," he said.

Nababan, who is from the Batak indigenous group that mainly lives in North Sumatra, was arrested after several Papuan groups complained to police on Jan. 25, warning the social media posts could trigger unrest. 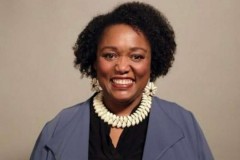 Fired Catholic radio host does not regret talking about race

They pointed to riots in Papua and some other Indonesian cities in 2019 following racial abuse directed against Papuan students in Surabaya in East Java.

The students were jeered and called monkeys by a mob when they were arrested after being accused of desecrating an Indonesian flag.

Kenan Sipayung, chairman of a Batak community group in Papua, said they backed legal action as Nababan's actions "have damaged the image of the Batak people.”

”[The posts] could create a misunderstanding between the Batak and other groups in Papua,” he said.

"As a very diverse nation, any racism or acts of discrimination based on race and ethnicity are of concern to all of us," he said.