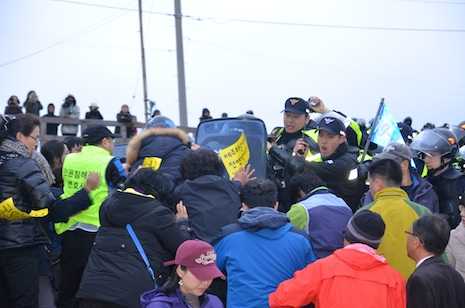 Activists and police have clashed several times at the site

An activist has accused police of rights violations at the site of the controversial Jeju Island naval base, which has been the focal point of a long-running protest. Myoung Sook claims to  have compiled numerous instances of alleged violations between September 2011 and June 2012, which she revealed at a press conference in Seoul yesterday. She said last September was when the violations grew more frequent and more serious, as riot police arrived to protect fences that were set up on Jeju Island beach. The fences surround the construction site of a giant new naval base.  The project has attracted widespread criticism and opposition from environmentalists and inhabitants of the island, which is considered a place of outstanding natural beauty and a UNESCO World Heritage site. According to Sook’s report, the police set up a hidden camera and constantly monitored the movements of villagers and activists. When some activists claimed that this was an illegal collection of evidence, they were arrested. The report also claims that police arrested nuns who were attending a Mass at the protest site. “In a mature, democratic society, the voice of objection should be considered in the policy making process,” Myoung Sook said. “But at this site, different voices are ignored and suppressed.” Father Andrew Park Dong-ho, president of the Seoul archdiocese Committee for Justice and Peace who organized the press conference said, “we need to examine an nation that pays no attention to the value of human rights. “Checks and balances are abandoned in the interests of security, by order of the Ministry of National Defence. At the back of it are the construction companies.” Fr. Park renewed his call for construction on the island to be halted. “Peace comes as the fruit of love and justice, not from superior military power,” he said. Related reports
Riot police break up protesters’ Mass