A young Rohingya refugee reads ‘Exodus: Between Genocide and Me’ by Rohingya poet Mayyu Ali at a refugee camp in Cox’s Bazar of Bangladesh. (Photo: New Ali)

The river separates Arakan and Bengal

The river that Rohingya startle to hear

The crossing is to escape or to die

Where many are swallowed alive

The East becomes a roaring inferno

Some leave their limbs behind, bodies are carried

Others cross with bullets embedded

A bullet in the chest is bigger than a heart

A body falls into the water Another dances on the riverbank

The world just watches on

Whilst criminals erase their marks

Whilst the human solidarity is a lie

Waves bear witness to what victims suffer. (The Naf River)

This heart-rending poem embodies the agony of one of the world’s most persecuted minorities — Rohingya Muslims. And it has been composed by a young Rohingya poet in exile.

Mayyu Ali, 28, lives with his parents at Balukhali refugee camp in Cox’s Bazar of Bangladesh. He is on the front line of a cultural resurgence among the beleaguered community.

Born and brought up at Maungdaw in Rakhine (Arakan) state of Myanmar, Ali studied for a BA degreee in English at the University of Sittwe in the state capital before sectarian violence in June 2012 stopped his education in the second year, forcing him to work for an aid agency in Maungdaw.

His family fled following the Aug. 25, 2017, military crackdown. “My home and village were burned down by the Burmese security forces and my parents and I escaped to Bangladesh for our lives,” Ali told UCA News.

Ali started composing poetry in Burmese when he was an eighth-grader and his early poems were based on friendship, nature and romance. From 2009 to 2012, he published 16 poems and more than 100 inspirational quotes in two popular monthly literary magazines in Myanmar — The Best English and The Light of English.

Ali grew up listening to lullabies and folk songs from his grandfather and mother, which survived as oral tradition “in the hearts of Rohingya” that was being passed onto generations for years even after the disappearance of the written form of the Rohingya language amid discrimination and persecution in Buddhist Myanmar.

Poetry for identity and revolution

As Ali grew older, his poetry went through a paradigm shift.

“I discovered how my people are discriminated and marginalized socially and politically, forcing me to write poetry for self-expression and representing myself to bring to attention of the world on what my people have been going through,” he said.

By then, Ali’s poems started centering on life and suffering of himself and the community. Writing poetry became his identity when Myanmar started denying Rohingya existence.

“Creating art and writing poetry became the act of advanced revolution. My poetry is my existence. It gives me hope even under the rain of bullets.”

Besides two literary magazines in Myanmar, Ali’s poems have been published in Modern Poetry Translation, World Literature Today and Combat Genocide Anthology. In June 2019, his first poetry book, EXODUS: Between Genocide and Me, was published by Black Raven. In the same month, he navigated and contributed I AM A ROHINGYA, a Rohingya poetry anthology published through Arc Publication. It was recently awarded the World’s Choice Honor of An Outstanding Book of Non-European Poetry and/or Translation by the UK-based Poetry Book Society.

The poetry collection combines oral literary tradition of Rohingya language songs and poetry presented in English poetic style that explore issues like love, marriage and cultural aspects of Arakan with strong imagery, which defy Burmese and Buddhist supremacy and attempts to erase the history of the Rohingya as a distinct ethnic group in Myanmar. It also denotes the strong relationship between Rohingya and the nation state of Myanmar.

The poetry movement has also garnered attention from Myanmar.

From Jan. 25-26, 40 poets across Myanmar participated in Poetry for Humanity, a poetry-reading event in Yangon where five Rohingya poets from Bangladeshi refugee camps read their poems by Skype video call.

It was a rare event of solidarity for the Rohingya minority with symbolic importance as the International Court of Justice on Jan. 23 ordered Myanmar to take immediate measures to stop the genocide against Rohingya following a lawsuit by Gambia. 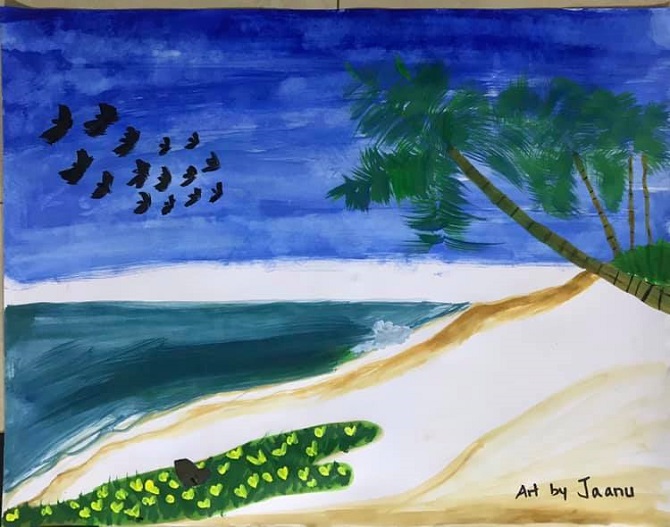 A painting by young artist Jaanu, a Rohingya refugee from a camp in Cox’s Bazar of Bangladesh. (Photo: Mayuu Ali)

In March 2019, Ali decided to extend the Rohingya poetry and art movement in refugee camps in Cox’s Bazar as he found there were many youth willing write and some of them were already posting short poems and essays on Facebook. After a short workshop for 22 Rohingya writers at Balukhali camp, he became co-founder and editor of The Art Garden Rohingya, a Facebook page and website to publish literature and artworks by Rohingya in English and Burmese.

Some 148 Rohingya writers and artists including nine women publish their works on The Art Garden Rohingya. By February, over 540 poems had been published. Many of their poems are in praise of Arakan, the homeland of Rohingya, while others depict Rohingya suffering in Myanmar and their perilous exodus to Bangladesh.

Rezwuan Khan, 23, one the contributing poets, lives in Kutupalong refugee camp, the largest Rohingya settlement in Cox’s Bazar, with his parents after fleeing to Bangladesh in 2017. He has composed 50 poems and some have been posted on the Facebook page and the website.

“We are persecuted Rohingya, so our minds and hearts are full of pain and we are traumatized. I rarely write about my personal pain; rather, I write about the collective pain and suffering of Rohingya people,” Khan told UCA News.

Despite the relative peace and safety in camps, most Rohingya are sad deep inside their hearts as they don’t like refugee life and there is no sign of their return to Myanmar soon, he noted.

“Rohingya are in a hopeless situation. Most of them are willing to return to Myanmar but they know well their houses and properties have been looted, burned and destroyed. Nothing is left. They want to go back if they are promised basic rights including citizenship,” he added.

More than one million Rohingya live in some 30 makeshift camps in Cox’s Bazar and the majority of them fled Myanmar after the 2017 violence.

In 2018, Bangladesh and Myanmar signed a deal to repatriate Rohingya. However, not a single Rohingya has returned in more than two years.

Two repatriation attempts since then failed as refugees refused to go back without concrete promises of basic rights and citizenship. The international community repeatedly alleged that the situation is Myanmar was not conducive for their return. Meanwhile, the escalation in fighting between Arakan Army insurgents and the Burmese military in Rakhine in recent times and the Covid-19 pandemic have put the repatriation plan in limbo.

While most Rohingya call on the international community to press Myanmar hard for a safe and dignified return of Rohingya, Mayyu Ali appeals to Bangladesh and the global community to help preserve their culture and literature.

“They should help us in researching and preserving our culture and literature by organizing contests, workshops and other social activities. Media outlets should publish our literature and artworks and encourage us,” Ali added.