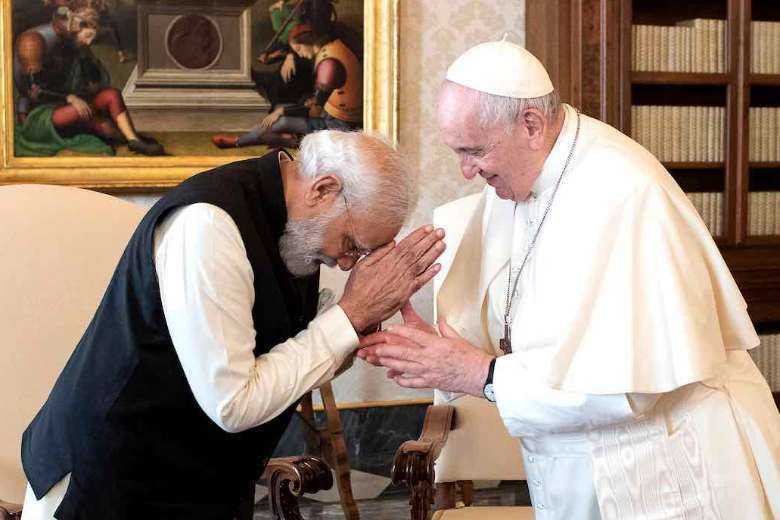 This photo taken and handout on October 30, 2021 by The Vatican Media shows Pope Francis and Indian Prime Minister Narendra Modi during a private audience at The Vatican. (Photo by Handout / VATICAN MEDIA / AFP) /

Prime Minister Narendra Modi Saturday asked Pope Francis to visit India, a significant opening towards the head of the Catholic Church who has long sought an official invitation to the Hindu-majority country.

Modi, 71, invited Francis during a meeting at the Vatican on the sidelines of the G20 summit in Rome.

"Had a very warm meeting with Pope Francis. I had the opportunity to discuss a wide range of issues with him and also invited him to visit India," Modi said on Twitter after the talks.

The pope, 84, has been on record saying that he wants to visit India. The Vatican had even drafted a schedule for a papal trip several years ago, according to the religious news website Crux.

"Thank you very much for your visit. I'm happy, I'm very happy," a smiling Francis said as he grasped Modi's hand at the end of the visit, according to footage released by the Vatican.

Modi replied: "I would like to see you in India."

Francis, leader of the world's 1.3 billion Catholics, is hoping to push the defence of religious freedom in the world's second-most populous country.

While Muslims, who make up around 14 percent of the population, have borne the brunt, Christians, who account for just over two percent, have also suffered a rise in reported violent attacks.

The last papal visit to India was made by Pope John Paul II in 1999.

Saturday's Vatican visit was Francis and Modi's first meeting. A senior official in the prime minister's office told AFP the "very warm" talks -- scheduled to last 20 minutes -- went on for nearly an hour.

In an unusually short note, the Vatican described it as "a brief conversation" in which "the cordial relations between the Holy See and India were discussed".

Modi's office said the leaders discussed "fighting climate change and removing poverty". There was no mention of the red-button issue of religious freedom.

Under the pretext that Christians are seeking forcibly to convert Hindus, more than 300 violent incidents have been recorded this year, according to a report by a group of NGOs released this month.

This included a reported attack on a prayer house by around 200 members of the BJP and Hindu groups in the northern state of Uttarakhand in early October.

The local head of the BJP said the prayer house held "suspicious gatherings".

At least three states run by the BJP have passed legislation aimed at preventing "forced conversion" and dozens of people have been arrested.

Others plan to follow suit including Karnataka, where priests have come out in protest.

In 2020, the US Commission on International Religious Freedom listed India as a "country of particular concern" for the first time since 2004.

Modi's government denies having a Hindu agenda and insists that people of all religions have equal rights.