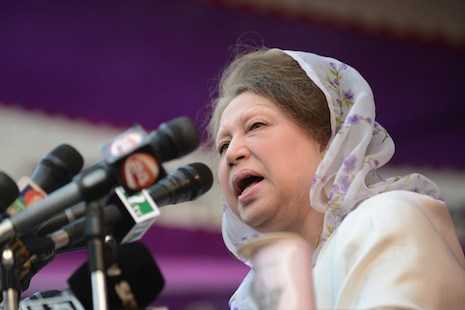 Bangladesh authorities threatened Tuesday to bring murder charges against the country's besieged opposition leader Khaleda Zia and arrested the boss of a private TV network after a wave of deadly violence.

A day after Prime Minister Sheikh Hasina accused her arch rival of trying to trigger anarchy, a minister said Zia should expect a murder charge over an arson attack by supporters which left three people fighting for their lives.

The threat, which comes after four activists from Zia's Bangladesh Nationalist Party were killed in the mounting unrest Monday, was made while the opposition leader remained confined to her offices in Dhaka.

The three people injured in the alleged BNP attack in Dhaka last week were in an autorickshaw that was firebombed by protestors — a frequent tactic of BNP hardliners who are trying to topple the prime minister.

"She should prepare for a murder case," Information Minister Hasanul Haq Inu said in comments that will do little to ease tensions in the volatile South Asian nation, a year on from Hasina's controversial re-election.

Confined and padlocked in her office in a up market Dhaka district, Zia on Monday called a nationwide non-stop transport blockade in an effort to topple the government and pave the way for inclusive polls.

In another sign of the government's determination to silence critics, a private television network was forced off air and its chairman arrested a day after broadcasting a speech from London by Zia's exiled son.

While police said the detention of the ETV chairman was prompted by its airing of "pornographic" material, a senior editor at the channel dismissed the official explanation as a smokescreen.

Zia's eldest son Tarique Rahman, who has been living in exile since 2008, is seen as his mother's heir apparent.

He has become a particular bane of the government after claiming that Hasina's father — who is widely regarded as the hero of Bangladesh's 1971 independence war from Pakistan — was in fact a stooge of Islamabad.

Hasina and Zia, who have between them ruled Bangladesh for most of the last three decades, have a notoriously poisonous relationship and frequently exchange insults and barbs about each others' families.

Ties hit a new low after the BNP and 19 other opposition parties boycotted last year's elections, claiming the contest would be rigged.

Awami League party leader Hasina, who has been in power since 2009, refused their demands for the polls to be organized by a neutral caretaker government as with previous elections.

Zia has been a virtual prisoner since Saturday, with the gates of her compound padlocked and a phalanx of riot police posted outside.

In brief comments Monday to reporters who managed to scale the walls of her compound, Zia accused her rival of trying to cling to power by force in a country that has seen more than a dozen coups in its 43-year history.

In an address to the nation on Monday night, a defiant Hasina laid the blame for the latest unrest firmly at Zia's feet.

"I am urging the BNP leader to stop these bomb and grenade attacks, these acts of sabotage, and killings, of arson and damage to property," Hasina said.

"The path you are following will not bring any benefit for the people. Instead you will lose public faith and confidence," she said, accusing Zia's 20-party opposition alliance of trying to create "anarchy and instability".

Although there were no reports of deadly violence on Tuesday, police said they had fired rubber bullets and tear gas at scores of BNP supporters when they tried to mount a transport blockade outside the capital.

Two police officers were injured during clashes with Islamists, who are part of Zia's cadre of opposition parties. AFP