Despite democracy advocates' huge poll victory, more protests are planned for the weekend Scattered clothes, protective gear and other objects are seen in a basketball hall in Hong Kong Polytechnic University on Nov. 26, over a week after police surrounded the building while protesters were still barricaded inside. (Photo: AFP)

Share this article :
Hong Kong authorities are hoping that a lull in clashes during last weekend’s local elections will bring order to the Chinese territory after six months of sometimes violent protests. Beijing reiterated its call to stop the violence and restore order after the election in which democracy advocates swept around 86 percent of the 452 district council seats. China’s leaders have set up a crisis command center in the tech hub of Shenzhen, just across the border from Hong Kong, to deal with protests that have become the biggest populist challenge since President Xi Jinping came to power in 2012, Reuters reported. Despite the euphoria among protesters over the election success, more protests are planned for the weekend, including a “No tear gas to children" march. The elections, which drew a record turnout, were seen as a slap in the face for Beijing-backed Hong Kong leader Carrie Lam over her handling of the territory’s worst crisis in decades.
Related News 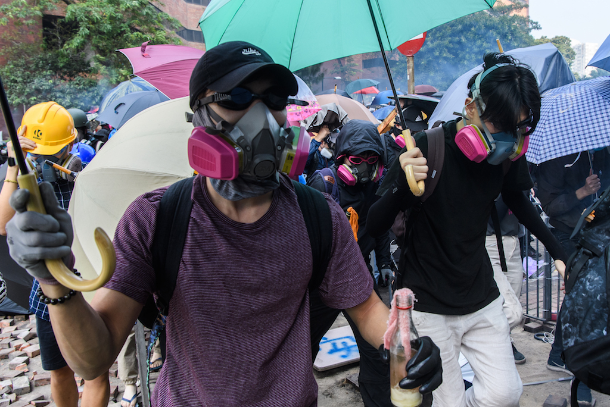 The Cross-Harbour Tunnel reopened today as a lockdown of nearby Hong Kong Polytechnic University appeared to be ending as authorities searched the campus for remaining protesters. Anti-government protesters barricaded themselves in the university and blocked the tunnel mouth almost two weeks ago. Toll booths were smashed, the road vandalized and fires lit as traffic was badly disrupted between Hong Kong island and the Kowloon peninsula. Police were still guarding the university’s perimeter today. It became a flashpoint when 1,000 protesters barricaded themselves inside and clashed with riot police in a hail of petrol bombs, water cannon and tear gas. Police later formed a security cordon around the campus to trap those inside, eventually making hundreds of arrests. Some protesters are believed to be still inside the building. Hong Kong newspaper Sing Pao today published a front-page article for the second successive day calling for Lam’s resignation. The protests started over a bill that would have allowed Hong Kong people to be extradited to the mainland for trial. It gradually developed into a democracy protest over what many perceive as Chinese meddling in the freedoms promised to the former British colony when it returned to Chinese rule in 1997. Beijing denies interfering and says it is committed to the “one country, two systems” formula put in place at the time of the handover.