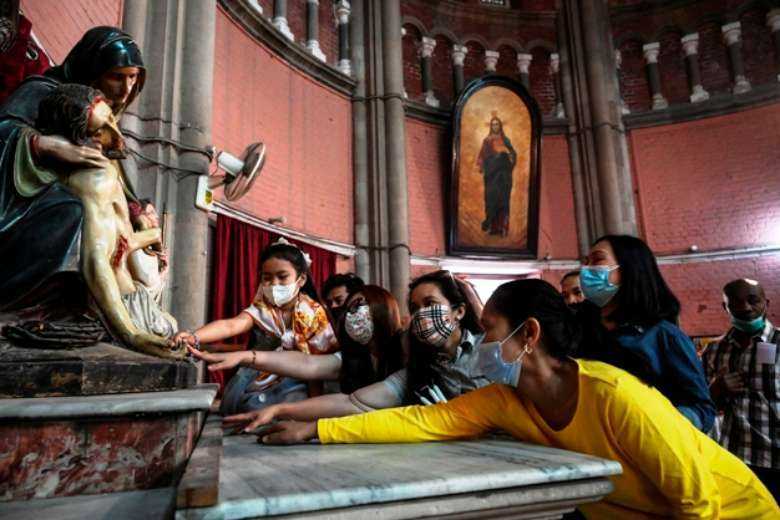 Christians pray before a statue after an Easter Mass at Sacred Heart Cathedral in Lahore, Pakistan, on April 4, 2021. (Photo: AFP)

Amid increasing intolerance in the Islamic Republic of Pakistan and the shrinking of its religious minorities, a Hindu lawmaker thinks that renaming a word might be the solution.

Last week a private member's bill moved by Kesoo Mal Kheeal Das in the National Assembly seeking to replace the word "minority" with "non-Muslim" in Article 36 of the constitution got the nod from the Standing Committee on Law and Justice.

“The word ‘minority’ is used four times [in the constitution] while the word ‘non-Muslim’ is used 15 times, which reflects the intent of the makers of the constitution,” Das said, arguing that the change of words will rectify the anomaly.

The proposal has sparked a new debate among human rights activists both at home and abroad.

In a message to Das, Centre for Social Justice (CSJ) executive director Peter Jacob suggested putting his bill on hold for some time.

“The term ‘non-Muslim’ will increase the religious divide. It won’t solve any problem. It will be a very dangerous move,” Jacob said, suggesting they hold discussions to polish and improvise their views in the matter.

Just imagine being called non-Hindus, non-Christians, non-Sikhs, non-Jews, etc, in other countries of the world

Cecil Chaudhry, South Asia deputy team leader of Christian Solidarity Worldwide UK, agreed with Jacob. “Minority is a universally defined and declared term. Addressing [them] as non-Muslim in itself not only has a religious connotation, which can be detrimental, but also 'non' has a negative angle to it,” he told me.

In 2017, I had written that changing the label cannot guarantee Pakistani Christians their dignity.

After experimenting with religious nationalism for decades and witnessing the resulting devastation, the country has no choice but to adopt the best practices, starting with secular terms.

“Just imagine being called non-Hindus, non-Christians, non-Sikhs, non-Jews, etc, in other countries of the world. #Shame,” Chaman Lal, the Hindu chairman of Samaj Sewa Foundation, said in a Facebook post.

There is no doubt that Pakistan’s minority faith groups have suffered far too much. They continue to be targeted by those who, driven by evil, seek to destroy the rich religious heritage of the nation.

That’s the reason the population of religious minorities has decreased by 0.18 percent between 1998 and 2017.

The 11th anniversary of the assassination of Shahbaz Bhatti, a Catholic federal minister for minority affairs, was observed with online events and vigils on March 2. It was Bhatti who led the campaign to have Aug. 11 declared as Minorities Day in 2009.

But many activists, as well as Catholic leaders, denounce the government-supported Minorities Day. Archbishop Sebastian Shaw of Lahore boycotts the Aug. 11 events, arguing the charter still mistreats minorities and advocates for the Day of Msaawat (equality) instead.

Minority leaders are now mobilizing their communities for the first-ever digitized population census scheduled for August. A strong demand is to introduce separate columns for the disabled and transgender people in the census form. Jews, Sikhs, Parsis, Buddhists, Kalash and Bahais too are lumped as "others."

“This category of others reflects that the concerned groups are not important. We demand respect as well. The census commission should do more to count us as well,” said Dr. Ruhhiya, a Bahai, at a recent CSJ seminar.

The fault lies both in the writing of the constitution and the practices adopted later. Traces of prioritizing the majority population or religion can be found in at least 25 articles of our constitution. Articles 41 and 91 of the constitution bar non-Muslim minorities from getting elected as president or prime minister.

We're talking about languages and practices that make people feel seen, feel included, and if you can make those changes to accommodate people, I think you should

Instead of renaming existing terms, efforts should be diverted towards amending such articles to restore the confidence of the minorities.

Kesoo Mal Kheeal Das would have won our hearts had he pleaded to put a ban on misusing the word kaafirs. In the Quran, Christians and Jews are referred to as Ahl al-Kitab (People of the Book).

The frenzied chants of “Kaafir, kaafir, Shia kaafir” (Infidels, infidels, Shias are infidels) have been followed by major terrorist attacks such as the March 4 suicide bomb attack during Friday prayers at a Shia imambargah (congregation hall) in the northwestern city of Peshawar.

The death toll has touched 63. Among the dead was a Pashtun student who had returned from Ukraine, escaping the war only to meet a ghastly end.

In the words of Maria Thattil, former Miss Universe Australia, political correctness is a good thing because it helps marginalized groups feel “seen and included.”

A bisexual of South Asian descent, Thattil said: "We're talking about languages and practices that make people feel seen, feel included, and if you can make those changes to accommodate people, I think you should.”

The festivities during Pakistan’s diamond jubilee celebrations will become truly meaningful when Muslim politicians stop referring to Christians as kaafir  and churhas (low caste) in assemblies and television talk shows.