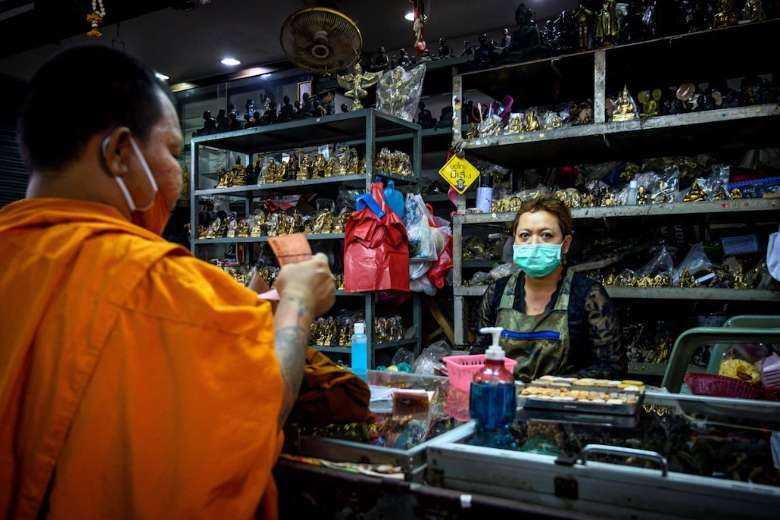 A Buddhist monk buys amulets at a specialized market in Bangkok. (Photo: AFP)

Two Thai companies are seeking to reduce their country’s massive plastic waste problem by turning discarded items into Buddhist amulets in a nation where charms are extremely popular.

The companies, which have just unveiled their design, are reusing nine types of recyclable materials such as plastic bottles and nylon fishing nets in order to create colorful amulets imprinted with images of the Buddha.

The plastic amulets on offer have received their alleged magical potency from blessings uttered on them by Buddhist monks, according to their makers.

“The idea of the plastic amulet is a result of finding a connection between the environment and Thai culture,” said Krit Phutpim, a director of Dots Design Studio, one of the companies involved.

The Southeast Asian nation is one of the world’s top five producers of plastic waste with some 2 million tons of such waste every year, according to the Pollution Control Department, which adds that only a quarter of the waste produced is recycled.

At the same time, Thailand has one of the world’s largest amulet markets with some 70 percent of locals wearing at least one Buddhist charm, according to polls.

Most amulets are traditionally made from wood, ceramics, metal and other durable materials, but amulets made of plastic are uncommon.

However, the makers of the new charms made from recycled plastic hope that they can raise awareness of the pressing need to reduce plastic waste.

Anyone who brings at least a one kilogram of plastic for recycling receives an amulet in exchange, although the amulets can also be purchased for 100 baht (US$3) each, with the money then donated to charities.

The concept of plastic amulets has met with mixed reactions from Thais, many of whom question their worth as proper amulets.

“I understand [the companies’] rationale and agree that we need to reduce waste, but I doubt these amulets will become popular,” one commenter noted online.

Others, however, have embraced the idea of amulets created from recycled plastic.

“For once there might be a positive aspect to this silly superstition that actually has nothing to do with the Lord Buddha’s philosophy, which eschewed superstitious worship of animate and inanimate objects, including the Lord Buddha himself,” a woman observed.

“It doesn’t matter what materials amulets are made of and plastic should be just as good as any other,” a man said.

“This is a great idea that uses a deep cultural reference point to raise awareness of another issue. Plus, I highly doubt these amulets are any less effective than [expensive materials],” another commenter noted.