Pediatricians call for a delay, citing the inability of young people to follow social distancing rules 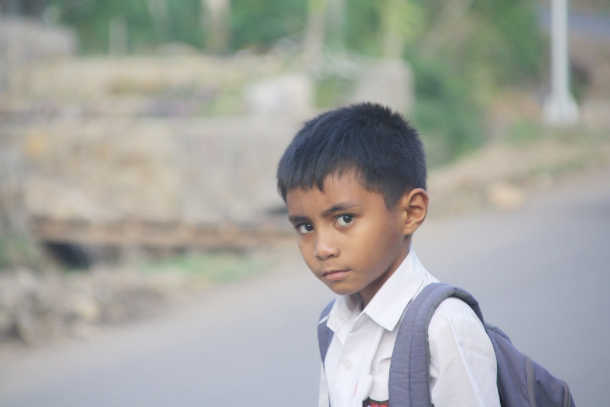 An elementary schoolboy returns from school in Labuan Bajo on Catholic-majority Flores island in this 2019 file image. The Indonesian Pediatric Society has called on the government not to reopen schools before December. (Photo: Siktus Harson/UCA News)

Indonesian pediatricians have called on the government not to reopen schools until the end of the year, saying children cannot follow health protocols on their own so were more likely to be infected with Covid-19.

They also said a recent study revealed hundreds of Indonesian children have been infected with the deadly virus and thousands are being monitored.

According to the study, conducted by the Indonesian Paediatric Society (IDAI) since the pandemic started to spread in Indonesia in February, Covid-19 has killed at least 14 children, while another 129 died while being monitored for the disease.

As of now, more than 800 children have been infected, while more than 3,300 are being monitored.

Pediatricians fear government plans to start the new school year on July 13 would be premature.

"Because infections were still increasing and large-scale social restrictions are being eased, it will be difficult for children to strictly follow health protocols,” the IDAI said in a May 30 statement

The association recommended that learning should continue to be done remotely. “To prevent more children becoming infected, schools should not resume before December this year. Reopening schools [earlier] should only be considered if cases are in decline,” it said.

Vera Sundoro, a Catholic mother of an elementary school student in Jakarta, also disagreed with the government’s move to reopen schools in July, saying the fears expressed by the pediatricians were well founded.

She doubted whether children could follow social distancing protocols. “It’s difficult to control children when they gather and interact. We should wait until no more new cases are recorded. It is better that schools continue distance learning,” she said.

“The safety, comfort and happiness of the children must be the first consideration,” he said, adding that studying at home remains the most sensible option.