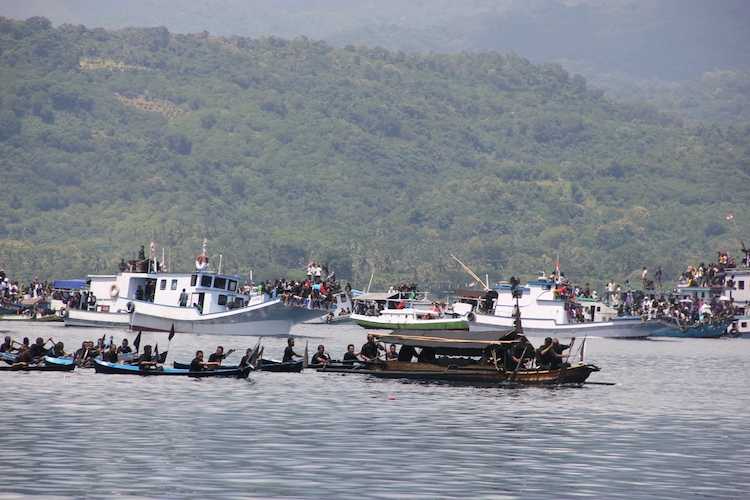 In this 2013 file photo, a procession carries a statue of the Baby Jesus to meet the Blessed Mother during a Holy Week festival in Larantuka, in eastern Flores of East Nusa Tenggara province. (Photo by Ryan Dagur)

Thousands of pilgrims have flocked to Larantuka, a town on the eastern tip of the Indonesian island of Flores for the Semana Santa, or Holy Week festival.

The growing stature of the event that has taken place for hundreds of years has prompted the government to declare the event a national religious tourism destination.

Senior Catholic figures, including Ignasius Jonan, Minister of Energy and Mineral Resources, the only Catholic minister in the cabinet and Frans Lebu Raya, governor of East Nusa Tenggara were attending festivities and religious observances.

Organizers expected tens of thousands of pilgrims to attend.

Hotels were fully booked and some pilgrims were staying in local people's homes.

Flores is a Catholic-majority island thanks to the Portuguese, who occupied the island in the 17th century.

Semana Santa usually begins on the Wednesday of Holy Week when the main roads in Larantuka are closed to create a prayerful ambiance.

On Maundy Thursday, pilgrims visit three different chapels, where statues of Tuan Ma (Blessed Mother), Tuan Meninu (Baby Jesus) and Tuan Anna (Jesus) are placed ahead of a traditional procession the next day.

The statues are usually kept under wraps and are only seen at festival time.

The festival reaches its peak on Good Friday, when the sea procession takes place in the morning. The statue of the baby Jesus is taken onboard a boat on a journey to meet the Blessed Mother, waiting at another chapel. Pilgrims cram into many boats to follow the baby Jesus' journey.

Ahmad Bethan, chairman of the East Flores Ulema Council said they have asked local Muslims to offer help to pilgrims unable to find accommodation during the festival.

"Pilgrims can stay at Muslims' homes. Musholas [small mosques] can be used too," he said.

"All Muslims here are willing to help."

Muhammad Husen Yunus, chairman of the youth branch of Muhammadiyah, Indonesia's second largest moderate Muslim organization said they were helping to provide security during the festival.

"We have been happy to do so over the years," he said.