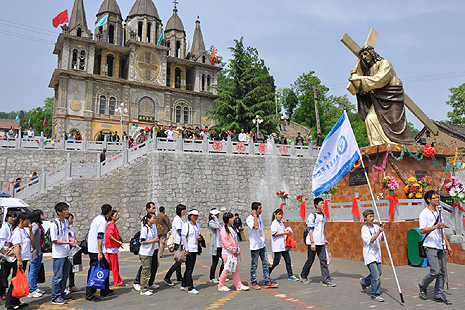 The Young Family of St. Bosco in Tianshui diocese made pilgrimage to Hill of the Cross pilgrimage site

About 40 members of the Young Family of St. Bosco in Tianshui diocese made a three-day pilgrimage in the beginning of the Marian month, during which they celebrated the beatification of late Pope John Paul II. The pilgrimage was led by Father John Baptist Wang, the diocesan administrator, who is not affiliated with the “open” Church structure. The youth group stopped at several parishes and the religious sister’s convent of Fengxiang diocese in neighboring Shaanxi province. They presented bookmarks specially made to commemorate Pope John Paul II’s beatification to the Catholics they met on their trip. They also spent one evening for sharing session with the lay leaders and priests of Fengxiang on the late pope. Before they arrived at their last leg at the Shizishan (Hill of the Cross) pilgrimage site in Meixian county, the young people also visited Bishop Luke Li Jingfeng of Fengxiang, a former “underground” prelate who can now work publicly. Bishop Li encouraged them to help build the Church community, citing Pope John Paul’s words that young people are the future and hope of the Church. He also answered questions they raised concerning about the Church in China. At the pilgrimage site, the Catholic youth wearing the same uniform first prayed the Rosary together. They made meditation along the Way of the Cross while Father Wen gave brief homilies at each station with themes related to the young people nowadays. The Way of the Cross that leads up to the hilltop took them two and a half hours to complete. When they reached their destination, six priests who accompanied their trip concelebrated a Mass to end the pilgrimage. The Young Family of St. Bosco was formed in 2010 after a summer camp for more than 80 university students. It aims to connect young people of Tianshui to provide them pastoral care through activities and different Internet platforms since some of them are working or studying outside the backward northwestern Gansu province. CH14114