Pilgrimage to where St. Thomas preached in India

During Holy Week visitors flock to the St. Thomas shrine, the source of Kerala's distinct Christianity 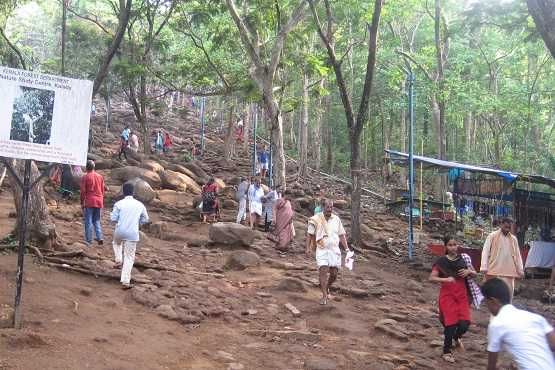 Thousands of Christians climb Malayatoor hill, a pilgrimage center for Christians in Kerala, where a shrine to St. Thomas stands. (ucanews.com photo)

At the age of 78, C.J. Jose is still determined to climb a 600-meter hill with his 73-year-old wife Marykutty as part of their annual pilgrimage.

Jose and Marykutty have climbed the hill in India's Kerala state every Easter for 41 years. However, they are not sure they will ever reach the top again to see the statue of St. Thomas after Jose broke his hip four years ago.

Other pilgrims stop to pray at Stations of the Cross laid out en route to the St. Thomas Shrine at the hill's apex but Jose said he and wife can now reach "only one or two stations. But this gives us enough spiritual nourishment for a year."

After the injury, Jose could not even sit up properly. "But I am now able to walk up to the first station without help. That is more valuable than anything else," he said.

Malayatoor hill, a pilgrim center for Christians in Kerala, is a verdant hill in the Western Ghats, skirted partially by Kerala's longest Periyar River in an ecologically sensitive area.

Thousands of Christians throughout the year climb the hill in Malayattor village in Ernakulum district atoning for their sins. The crowd swells to hundreds of thousands during Holy Week.

"More than 200,000 Christians must have climbed this Palm Sunday" on April 9, said Muttamthotil Thomas, a local parishioner.  "The crowds reach 600,000 on Maundy Thursday and Good Friday because people believe walking the hill is a penance," he added.

More than 3 million pilgrims visit the shrine, known as Kurisumudy (hill of the cross) in the local Malayalam language, each year. They believe that St. Thomas visited there when he traveled to Kerala state in 52 A.D.

Most Christians in Kerala follow this tradition; they constitute about 18 percent of state's 33 million people. Known as St. Thomas Christians, they are divided into seven major congregations including two Catholic rites.

Shrine rector Father Xavier Thelekkat told ucanews.com that "it is not a mere pilgrimage center but the church sees it as part of its most precious apostolic heritage."

Larger crowds are coming each year according to Muttamthotil Thomas. Those who came before are attracted back, keen to repeat their spiritual experience, and more people are coming too, he said, adding that "three decades ago the crowds were fewer." Catholic pilgrims C.J. Jose and his wife Marykutty at the foot of Malayatoor hill in Kerala, getting ready to climb the 600 meter high hill as part of their Lent penance. Thousands of Christians climb the hill during the Holy Week. (ucanews.com photo)

Groups of people from parishes across Kerala make extra-long pilgrimages by walking from their home parishes to the hill; sometimes covering a few hundred kilometers, praying and carrying crosses.

One group was led by Father Shaji Elayadathu, parish priest of St. Joseph's Church at Benjode in Wayanad district. Some 50 people joined him on a 300km trek.

During the walk the pilgrims were "trying to understand the pain Jesus Christ underwent before his crucifixion," said Father Elayadathu, who has been visiting the hill for 18 years.

Tony Paulose, who works as a volunteer at the pilgrimage center said most of the devotees climb the hill carrying crosses of different weight. Some groups come with single cross weighing more than 75 kilograms.

"Several people carry stones on their head. Women carry brooms in the belief that it will give them long and thick hair," he added.

According to tradition, St. Thomas faced a hostile reception while traveling along the famous caravan route from Kerala to Tamil Nadu. This forced him to flee to the top of the hill where he spent several days.

There, he prayed by a well and left his footprints. Later, more relics were added to the site. Pilgrims consider them holy and say they have healing powers.

After leaving the hill, St. Thomas continued his journey to Mylapoor, near present Tamil Nadu capital Chennai, and later died a martyr's death there.

Hunters first discovered the holy shrine and local people began a practice of lighting an oil lamp on the mount. Legend has it that whenever the lamp is blown out by the wind, a herd of goats come down, wailing and so people know to go up and light the lamp again. Even today, pilgrims carry sesame seeds to feed the goats. Saffron-clad pilgrims rest mid-way on the Malayatoor hill where thousands walk as part of their Lenten practice. (ucanews.com photo)

Father Xavier said he was trying to "protect the historical value of the place by enhancing its spiritual appeal." His plans include a permanent retreat center and a conveyor system to carry old and sick people to the top.

The priest also plans to have the state government put the shrine on the state tourist map and develop its facilities. The government this year sanctioned 25 million rupees to augment the facilities at the center.

However, for pilgrim, Shaji Joseph the shrine has a personal significance. He first visited the hill seeking a favor. "I came first after my wife suffered three miscarriages. I got a child in the second year of my pilgrimage," he said.

Now Shaji returns every year to give thanks. He even dedicated his son to Muthappan (great grandfather), a nickname for St. Thomas.