Blessed Gabriele Allegra first translated the Bible into Chinese, his Sicilian home will be renovated for pilgrimages Members of the Gabriel's Fra Le Genti association celebrate a thanksgiving Mass on May 15 at the former residence of Blessed Gabriele Allegra where they plan to build a new retreat center. (Photo supplied)

The former residence of Blessed Gabriele Allegra (1907-1976), the Italian bible scholar and priest who first translated the Bible into Chinese, will be converted into a pilgrimage site thanks to the support of Chinese Catholics.

Gabriel's Fra Le Genti, an association to honor Father Allegra, announced that the priest's former residence in Sicily was transferred to them on May 10.

The association, founded in 2015  by Rosairo Allegra, a nephew of Father Allegra, plans to turn the site into a place of retreat and spirituality.

A thanksgiving Mass was held in front of the house on May 15 to mark the beginning of the renovation project expected to be completed in 2018.

"The chapel with the tomb of Father Allegra in Sicily is very small. The pilgrim center will provide an integrated place for people to commemorate him, especially Catholics from China and Hong Kong," Franciscan Brother William Ng in Hong Kong told ucanews.com.

The Order of Friars Minor in Hong Kong and Chinese Catholics are among the project's supporters. Hopefully the pilgrimage center will inspire more visitors to think about missionaries in China, Brother Ng said.

Sister Lucy Chung of the Franciscan Missionary Sisters of Our Lady of Sorrows, an active supporter of the project, said Father Allegra's relics were spread around Sicily so his nephews decided to collect and display them in one pilgrimage center.

"Turning the residence into a pilgrimage center will let more people know about the passion of Father Allegra's mission in China and his devotion to the divine word," Sister Chung told ucanews.com.

"His nephew came to Hong Kong for the celebration of Father Allegra's birth centenary in 2007. He told me his idea and invited people who knew the priest to be involved. We do this to show our gratitude to Father Allegra for bringing us the Chinese Bible," said the nun who had met the priest. 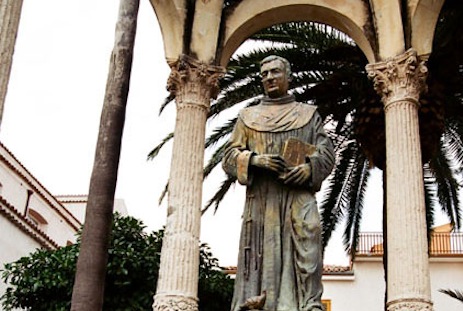 Father Allegra was born in 1907 and is best known for producing the first full translation of the Bible in Chinese which led to him to be popularly known as the "St. Jerome of China." Inspired by Giovanni da Montecorvino, the first Franciscan missionary to China in the 13th century, Father Allegra went to preach in central Hunan province in 1931.

Father Allegra created the Studium Biblicum Franciscanum in Beijing in 1945 to pursue his translation mission. It was relocated to Hong Kong three years later due to political turmoil in mainland China. The first and only official Chinese Bible translated from Hebrew, Aramaic and Greek was published in 1968.

Father Allegra died on Jan. 26, 1976 and he was beautified in 2012 making him the first Blessed of Hong Kong Diocese and the Franciscan province of Taiwan-Hong Kong.

The priest spent three years in Singapore between 1961 and 1963 as the head of a social institute set up by the Vatican to produce and disseminate anti-communist literature around Asia.