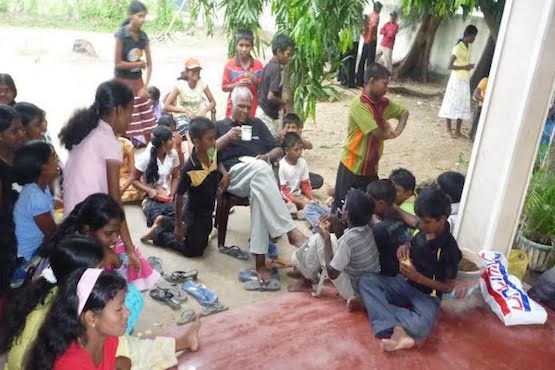 Father Paul Satkunanagam, seated, with children at a home he established that helps young people displaced by civil war and natural disasters. (Photo by ucanews.com reporter)

Maheshwari's husband fought with the Tamil Tiger militants during Sri Lanka's bitter civil war and when he was killed in 1995, she was left alone with their young three children.

"After that, it was mental agony staying where we lived because other villagers looked at my family with suspicion," said Maheshwari who is a Tamil Hindu.

Maheshwari described how she became increasingly isolated in her village in Batticaloa province on Sri Lanka's east coast.

Fortunately, she met Father Paul Satkunanagam who was travelling through the area offering trauma counseling for those affected by the 25-year-long civil war or from natural disasters such as 2003's Boxing Day tsunami.

Father Satkunanagam gave the family counseling and Maheshwari took it to heart.

"I became self determined and with the support of Father Satkunanagam I can now make a decent income from farming and my children are enjoying schooling," said Maheshwari fighting back tears.

As well as being a Jesuit priest, Father Satkunanagam is a professional counseling psychologist who trained at Loyola University, Chicago and St. Louis University, Missouri.

"It is the mission of a Jesuit priest to reach the downtrodden in the society said Father Satkunanagam. "Making use of the knowledge I gained, I took passion in serving groups in need of someone's support.''

For 47 years Father Satkunanagam has provided counseling to those in need. The civil war period 1983 — 2009 was the most challenging.

"During the war I was detained and questioned by the security forces on several occasions," said Father Satkunanagam.

"It was difficult to convince them about our work but as time went on the soldiers understood the depth of the service,'' said the 78-year-old.

In 1993, Father Satkunanagam founded the Professional Psychological Counseling Centre in Batticalloa, which aims to assist anyone suffering trauma or other mental health challenges.

The end goal of the center is to have its patients able to return to society as normal citizens.

"It is difficult to build relationships with traumatized clients," said Father Satkunanagam. "But once mutual trust is built, the result would be a new individual who can positively change society,'' he said.

Over the years, the center has successfully assisted more than 5,000 people.

The center's administrative officer, Leelawathi Kanapathipillai, says Father Satkunanagam goes out in search of those in need.

"He serves people irrespective of ethnicity, religion or caste. He does not wait for the affected to seek out help,'' said Kanapathipillai who has worked with the priest for more than five years.

Father Paul also runs six homes for more than hundred disadvantaged children. Not only do the homes offer primary and higher education to children, but vocational training as well. The homes also provide children various programs that improve their social skills.

Both the center and the children's homes are funded by donations provided locally or from abroad.

Around 15,000 children in the Batticaloa province were orphaned by the civil war that ended in 2009. Father Paul Satkunanagam was honored by V-Awards on Feb. 13 for his work treating people suffering trauma in Sri Lanka. (Photo by ucanews.com reporter)