Philippines to turn lights off, pray to observe Earth Hour 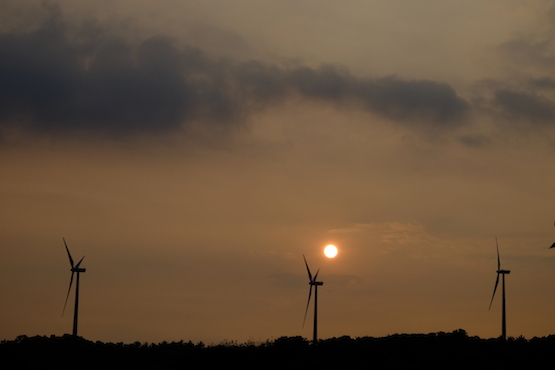 Windmills in the eastern part of the Philippine capital are defined by the rising sun. The 27 turbines in the province of Rizal, where wind speed is as high as 36 kilometers per hour, is the second wind farm in the northern part of the country. This year's observance of Earth Hour focuses on the proper use and care of nature. (Photo by Jimmy Domingo)

Catholic parishes around the Philippines are turning off lights and holding prayer sessions as part of the annual local observance of Earth Hour on March 24.

In Manila, Cardinal Luis Antonio Tagle called on Catholics to take the opportunity to pray and recite the rosary as "we allow Mother Earth to conserve energy and get some rest."

The prelate said that "part of our being good disciples of the Lord is the proper usage and care of Mother Nature."

In the central Philippine province of Negros Occidental, Bishop Gerardo Alminaza of San Carlos called on Catholics to join the observance.

"When it comes to the care for our common home, Mother Earth, everybody has something to contribute," said the prelate.

Father Anton Pascual of the Catholic radio station Veritas 846 said that aside from joining activities, the public should also be made aware about the effects of climate change on biodiversity.

"Let us take this as an opportunity to promote the habit of conserving and utilizing our natural resources," said the priest.

The annual Earth Hour observance started in Australia with a symbolic switch-off event led by the World Wide Fund in 2007.

It has since become the world's largest grassroots movement for the environment that mobilizes hundreds of millions of people in over 7,000 cities and 172 countries.

Earth Hour teams around the world has been using the movement to raise support and funds for access to renewable energy and driving climate-friendly legislation and policy, among others.

The Philippines was the first country in Asia to join the movement in 2008.

Now, the Philippines has been heralded as the "Earth Hour Hero Country" for topping Earth Hour participation levels from 2009-2013, contributing over 1,600 of the world's 7,000 Earth Hour hubs.

This year, in addition to participating in the global switch-off, the global environmental group World Wide Fund for Nature is inviting people to connect2earth to share and talk about what nature means to them.

"Nature is in alarming decline. Halting its loss is urgent and crucial as much as tackling climate change," said Marco Lambertini, director general of the World Wide Fund for Nature in a statement.

He said that this year's observance aims "to shine a light on the importance of biodiversity and nature."