Flights from South Africa, Botswana and other countries with local cases have been temporarily suspended 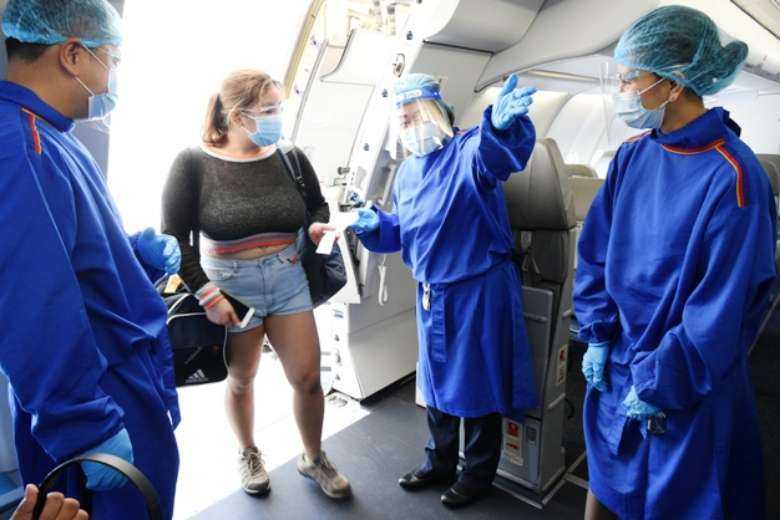 Philippine Airlines' crew members wearing protective gear welcoming a passenger on a flight prior to departure at General Santos City airport, on the southern island of Mindanao, on June 24. (Photo: AFP)

The Philippines on Friday suspended flights from countries with cases of a new coronavirus variant that was first detected in South Africa, President Rodrigo Duterte's spokesman said.

"(T)he temporary suspension of inbound international flights from South Africa, Botswana, and other countries with local cases or with the likelihood of occurrences of the B.1.1.529 variant... shall take effect immediately," spokesman Karlo Nograles said in a statement.

The announcement came hours after the government announced it will reopen to fully-vaccinated tourists from most nations from December 1 to help revive an economy battered by the pandemic.

Nograles said the government has since imposed heightened border control measures to prevent the entry of the new coronavirus strain.

The flight suspensions -- which will last initially up to December 15 -- also include Namibia, Zimbabwe, Lesotho, Eswatini, and Mozambique.

Passengers who have been to these countries over the past two weeks are also barred from entering the Philippines, he added.

The government also ordered the immigration services to locate travelers who flew in from these nations in the past week and place them under a 14-day quarantine.

Tourism is a major driver of the Southeast Asian country's economy and accounted for nearly 13 percent of the gross domestic product in 2019, official data shows.

But that slumped to 5.4 percent last year as arrivals plummeted more than 80 percent to 1.48 million after the government barred travelers from its white-sand beaches and other tourist draws.

Officials have eased virus restrictions in recent weeks as the daily infection rate hovers at the lowest level since the beginning of the year, and the nationwide vaccination rate increases.

Around one-third of the country's 110 million people are fully vaccinated.

The Philippines has recorded more than 2.8 million infections since the start of the pandemic, including more than 48,000 deaths, according to the latest official count Friday.