Catholics look to Santo Nino for protection and good luck 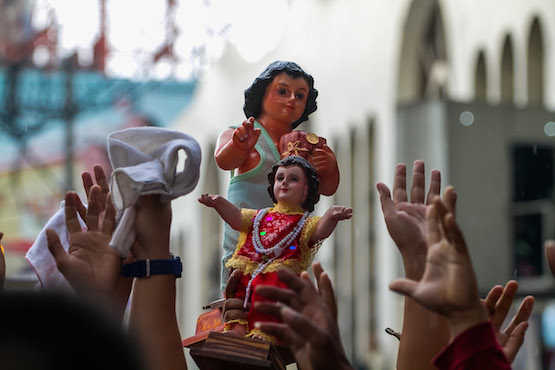 Images of the Child Jesus are raised by devotees during a religious procession in Manila. (Photo by Mark Saludes)

Maria Rosario Tuldanes dances in front of a small altar inside her house as she prays before the image of the Santo Nino or Child Jesus.

The 48-year-old woman from the province of Surigao del Sur says dancing "amplifies" her prayers, "just like what they do in the Sinulog festival."

The Sinulog is a weeklong religious celebration in honor of the image of the SantoNino in the central Philippine province of Cebu.

The image, a gift of Portuguese explorer Ferdinand Magellan to the queen of the island during her baptism as a Catholic in 1521, is believed to be miraculous.

The Child Jesus is no doubt the most famous child in the Philippines with his image prominently displayed in all possible places, including offices, vehicles, and even nightclubs and girlie bars.

The weeklong celebration of the Sinulog, the oldest festival in the country, starts every third Sunday of January with colorful parades, fluvial processions, street dancing, and other festive rites.

On a wooden altar inside a small shoe repair shop in Manila's Tondo district sits an old image of the Child Jesus dressed in a simple plain cloth.

Theresa Rodring, 60, says the grubby image is the reason why the shop is still open.

"The Santo Nino brings in clients every day," said Rodring. "He's been here for more than two decades and never left us empty handed," she says.

Like Rodring, Jon-jon Calala, a 36-year old electronic repairman, claims that the image of the Child Jesus gives him luck and attracts customers.

"Since I put him on that altar, we've never had a lousy day," says Calala, pointing at his image in the middle of a pile of old television sets, electric fans, and radios. A devotee carries an image of the Child Jesus dressed as a policeman. (Photo by Mark Saludes)

A reminder of God's presence

"Sometimes, Filipino Catholics overdo their practice of their faith," says Father Ambrosio Nonato Legaspi of the Diocese of Novaliches in Manila.

"Often, our devotion becomes an obsession and we make ourselves believe that religious icons are God Himself," the priest says.

"It is one reason why Filipino devotion is misunderstood by visitors as fanaticism," he adds.

"People believe that God lives on these images because they experienced and saw Him in these icons," says Cornelio, a sociologist of religion at the Jesuit-run Ateneo de Manila University.

"We may call it popular religiosity, but the mere fact that people are converging to give praise or worship God because of these images, they are practicing religion, and there is no false practice of faith because they believe in the same God," he adds.

Fashion of the Child Jesus

In a street corner of Manila's Quiapo district, Rina Mananzan, 66, attends to her stall displaying images of the Child Jesus in various sizes and dressed in various costumes.

A firefighter Child Jesus stands beside a police SantoNino. Almost all professions — from farmer to doctor to student — are represented.

"People want to feel that God is with them in their everyday lives," says Father Legaspi. "We want Him near us."

The priest says Filipinos want God "to be in what they do or what they live for." He says the Child Jesus is a reminder that "God is so humble to become human and be one with our own struggles."

"He elevated our humanity and decided to come among us as a man," says Father Legaspi.