The Catholic Bishops’ Conference of the Philippines (CBCP) has announced the death of the country’s oldest prelate.

Bishop Jose Sorra, who served Legazpi Diocese in southern Luzon from 1993 until his retirement in 2005, died on Jan. 21 of respiratory failure aged 91.

“It is with deep sadness that we as a diocese mourn the death of Bishop Emeritus Jose Crisologo Sorra,” Bishop Joel Baylon of Legazpi said in a letter to clergymen and churchgoers.

Bishop Sorra was born on the island of Catanduanes in the Bicol region. He received his priestly formation at the Holy Rosary Seminary in Naga City in the same region.

He later studied at the University of Santo Tomas in Manila and at Fordham University in the United States for his master’s degree.

In his early years as a priest, he served as national director of Student Catholic Action of the Philippines, the first student religious organization in the Philippines that took part in mass protests during the dictatorship of late strongman Ferdinand Marcos.

After his ordination as bishop in 1974, he was appointed chairman of the bishops’ Commission on Youth.

He was also a member of the CBCP’s permanent council, a body that acts for and on behalf of all the bishops.

After his stint on the council, Bishop Sorra served in the secretariat of the Social Action Commission.

Bishop Sorra was Lagazpi’s fourth diocesan bishop but was a man of many firsts, according to Bishop Baylon. Cemeteries are no place to party, Filipinos told 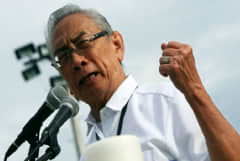 He was the first bishop in the diocese to set up a welfare plan for his clergymen by building a pastoral and retreat center for the spiritual formation of both clergymen and churchgoers.

He also organized the first synod or church council to discuss the concerns of clergymen, including how to handle sexual abuse cases and corruption in the Church.

Legazpi Diocese has declared Jan. 26 as a day of mourning for Bishop Sorra.

“All parish activities will be suspended and parish offices in the diocese will be closed. There will also be a simultaneous ringing of bells at noon as a sign of our grateful remembering of Bishop Sorra in our prayers,” said Bishop Baylon.

He urged churchgoers to pray for the soul of Bishop Sorra at Masses to be celebrated across the diocese.

“We will miss Bishop Sorra. He was a man of simplicity and gentleness. He always made himself available for people. I admire his courage in shaping the religious consciousness of young Filipinos,” Arnel Barcinas, a churchgoer in Legazpi Diocese, told UCA News.