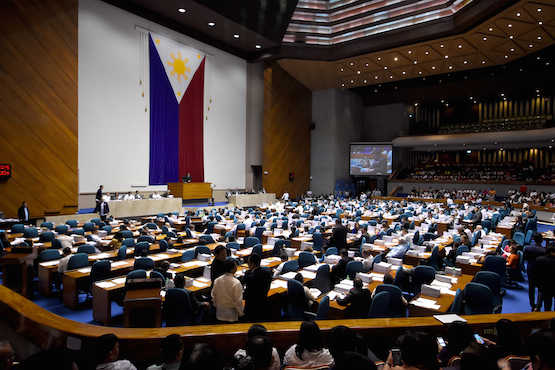 The Philippine House of Representatives pass a bill to reinstate capital punishment during its second reading on March 1. (Photo by Angie de Silva)

The predominantly Catholic Philippines moved closer to reinstating the death penalty on March 1 after a bill to allow capital punishment for drug-related offenses passed its second reading in the country's Lower House of Congress.

Legislators railroaded the passage of the proposal amid a howl of protests from opposition congressmen, nuns, and activists in the House of Representatives in Manila.

The re-imposition of capital punishment was a campaign promise of Philippine President Rodrigo Duterte who vowed to fight the proliferation of illegal drugs and heinous crimes.

At least 7,000 suspected drug users and dealers have been killed after the government launched an intensified campaign against narcotics seven months ago.

The House of Representatives, which is dominated by the president's allies, approved the death penalty bill in its second reading after dropping a number of crimes from a list of offenses originally intended to warrant capital punishment.

The third reading of the bill in the House of Representatives, scheduled for next week, is expected to be a formality.

Under the proposed law, seven drug-related crimes are punishable by death, excluding possession for personal use.

Rape and murder are not included among crimes punishable by death.

Opposition legislators denounced what they described as "bullying" tactics by Duterte's allies in Congress.

Rep. Teodoro Baguilat Jr., an opponent of the bill, said the process by which the proposed measure was passed was shameful.

"It is not that we lost, but our arguments were ignored," Baguilat told ucanews.com.

"It was bullying, dictating, making legislators puppets. Martial law was in effect in Congress," he said, adding that never in the history of Philippine legislation were legislators barred from questioning a proposed measure.

"We fear that it might happen in other proposed bills," said Baguilat.

"I have never experienced this inordinate muzzling of members of the House," longtime legislator Edcel Lagman said. "This is a chamber of puppets and bullies," he added.

"We were expecting to be given the opportunity to freely express our views," he said.

The bill's supporters "blatantly ignored and disrespected the faith" of Catholic Filipinos who were observing the first day of Lent, he added.

"God does not matter anymore in this Congress," he said.

Church leaders said the fight against capital punishment was not over.

"We will not give up the fight," said Manila Auxiliary Bishop Broderick Pabillo.

Archbishop Ramon Arguelles of Lipa said it was ironic the House of Representatives passed the "anti-God, anti-life, anti-humanity measure" on Ash Wednesday.

Claretian Father Eduardo Apungan, spokesman of the Association of Major Religious Superiors of the Philippines, said "from a moral point of view, the death penalty kills not only people but the culture, values, faith of Filipinos to the point of advancing a culture of death."

Sister Maria, a nun of the Siervas de San Jose congregation who attended the Lower House session, noted that many of the legislators were not even listening.

"They were afraid," said Sister Maria, adding that she talked with several congressmen who admitted that they were pressured to vote for the proposed measure.

"They are against it, but are afraid," she told ucanews.com. "Many still believe in life but many of our leaders are in fear."

Hope in the Senate

The bill's opponents hope it will die in the Senate because of stronger opposition to capital punishment in the upper chamber.

Under the Philippine system, a proposed bill has to pass both the House of Representatives and the Senate before it can be signed into law by the president.

Senate deputy minority leader Bam Aquino said senators will not allow the bill to be rushed.

"We must ensure that proper debate on the matter be conducted. We will not allow votes to be anonymous or hidden, and we will ensure accountability among our colleagues," said Aquino.

The opposition senator said the Senate will show that "it can still be an independent institution even with the political strife in the country."

"Life is at stake here. We cannot take it for granted," he said.