Bishops up in arms over education department's revision 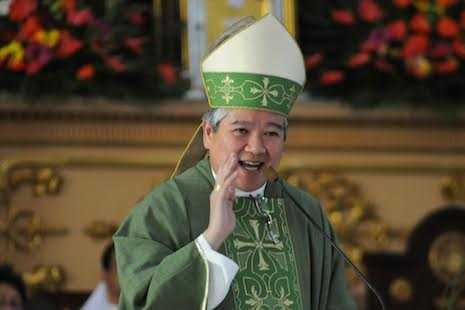 The Catholic bishops' conference on Friday rebuked the Department of Education for removing the word "God" from its vision statement.

A vision statement is "not an empty platitude. It guides the articulation of policy. It orientates plans of action," conference president Archbishop Socrates Villegas said.

"We maintain that the formation of God-fearing pupils and students is a vision that cannot be surrendered," the prelate said.

He added that the department's vision, mission and values statement "is a living document that is meant to reinvigorate … society as a whole”.

"It is meant to permeate and to affect the way we behave and how we find solutions to complex issues. It is meant to be part of public discourse and personal transformation."

The Department of Education decided to remove the phrase "formation of functionally literate and God-fearing Filipinos" from its vision statement after atheists and the group Filipino Freethinkers complained that the phrase is "too sectarian" for a government institution.

In a letter last year, the Filipino Freethinkers said the use of the phrase "God-loving" was a violation of the "principle of secularism”.

The words "enshrine theism as a preferred belief system and imply that those who do not subscribe to belief in a deity are at best second-class citizens who have flawed or incomplete values", the group said.

It added that the Philippine constitutional separation of Church and State was "inviolable”.

The Education Department later rewrote its vision statement to read: "We dream of Filipinos who passionately love their country and whose values and competencies enable them to realize their full potential and contribute meaningfully to building the nation."

In a statement last week, the department said its vision, mission and core values statements "is one document and should be read in its entirety to grasp the full meaning”.

Villegas, however, said the right of a child to recognize, love and hope in God “cannot be harmful to anyone else, believer or not”.

He said respect for pluralism "does not compel civil society to expunge the name of God from public life when the majority of Filipinos continue to acknowledge God’s sovereignty and trust in divine providence”.

The prelate called on Catholic teachers not to get tired of teaching "that God is the beginning and the end of all things, that he is the Father who wishes all to have life, and to have it to the full”.

He reminded teachers of the dignity of their calling as "evangelizers within the world and its concerns”.