Church holds online blessings for pets ahead of feast day of St. Francis of Assisi, the patron saint of animals Catholics raise their pets in front of their TV screen for the pet blessing. (Photo: Philippine Animal Welfare Society)

Animal lovers in the Philippines held an online blessing of pets at the weekend to commemorate World Animal Day.

World Animal Day on Oct. 4 is an annual celebration that aims to raise the status of animals and improve welfare standards for them around the globe. It falls on the feast day of St. Francis of Assisi, the patron saint of animals.

The Philippine Animal Welfare Society (PAWS) urged Filipinos to raise their pets in front of their television screens for the blessing after Sunday Mass on Oct. 3.

PAWS is a non-profit organization that promotes animal rights and welfare. The organization also adopts and cares for abused pets and animals.

In the last two years, PAWS had organized online blessing of pets because of the pandemic.

“The pandemic has prompted us to switch to a virtual celebration of this important day to keep everyone safe.,” PAWS executive director Anna Cabrera said in a Facebook announcement.

We are blessed. We want our pets to also feel they are a part of the Christian family and they are gifts from God

“Those who wished their pets to be blessed could celebrate the Mass beside their pets and raise them during the blessing of pets.”

The organizers likewise urged pet owners to capture the moment they raised their pets in front of their television sets and post their photos online.

Cabrera said pets have played a significant role in helping people cope with social restrictions such as having to stay at home due to Covid-19.

“The Covid-19 situation has also highlighted our interconnectedness — what happens to one human being affects another in very much the same way that our treatment of animals and the environment affects all lives on this earth,” Cabrera said. 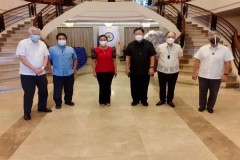 Salesian Father Jose Antonio “Joey” Paras celebrated the online Mass that was attended by many pet owners across the country.

In his homily, Father Paras said animals are gifts from God that need human care.

“When God, in the story of creation said, you shall have dominion over all of these [creatures], he did not mean to abuse them [animals] but to take care of them as part of nature,” Father Paras said.

Meanwhile, hundreds of animal lovers had their pets blessed in a drive-through ceremony in a parish in Quezon City, Manila.

St. Francis of Assisi Parishioners held a drive-through blessing with pet owners in a long queue of vehicles.

"We are blessed. We want our pets to also feel they are a part of the Christian family and they are gifts from God," parishioner and dog lover Maribeth Sy told UCA News.

More than 500 animals were blessed during the event.