In this file photo, activists stage a protest outside the Environment Department in Manila to call for an end to the use of coal as an energy source. (Photo: Mark Saludes)

The Association of Major Religious Superiors in the Philippines (AMRSP) has helped launch this year's Season of Creation with an appeal to Catholics to renew their relationship with God and all creation.

The global event is a month-long campaign by Orthodox and Catholic churchgoers against climate change.

“The Season of Creation is a time to renew our relationship with our creator and all creation through repenting, repairing and rejoicing together. The annual season, which runs from Sept. 1 through Oct. 4, is our time to connect with our creator on a deeper, more intentional level,” the group said in a statement posted on its website.

Each year, the ecumenical steering committee chooses a theme to unify Christian religious groups around the world. This year’s theme is “Jubilee for the Earth: New Rhythms, New Hope.”

The AMRSP said there were lessons to be learned during the coronavirus pandemic in relation to human economic activities.

“Climate change caused by human invasions on biodiversity impacts on the health of both the earth and human beings. A sick world is a sick people. Yet the pandemic also brought home in real terms the meaning of Pope Francis’ concepts of 'our common home' and humanity as being a single family,” said the AMRSP statement.

The group also said no country has been spared in the pandemic, yet churchgoers have gained a deeper understanding of “global solidarity” to address threats to public health.

The statement also said another concept of Pope Francis’ encyclical Laudato Si’ was made real, “the cry of the earth, the cry of the poor.”

“It's the poor and vulnerable who are hardest hit by natural disasters and pandemics … We need to strengthen the conviction that we are one single human family. The earth, our home, is beginning to look more and more like an immense pile of filth,” said the superiors.

According to the AMRSP, a healthy biodiversity would lessen the probability of another pandemic from occurring. 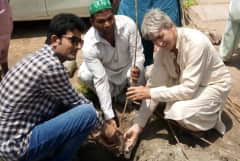 “A healthy planet is a healthy people and can be a world at peace. There can be no turning back. In a post-Covid 19 world, governments and businesses must stop destructive practices such as the use of non-renewable energy mining, logging that leads to deforestation, industrial farming and fishing, industrial production of foods and consumer goods that infringe on wildlife and the rights of nature.

“Governments must also make bolder steps to prevent wars and the nuclear arms race. At the heart of nature’s plea to every human being and all governments — respect and uphold the rights of nature and human rights. Live with justice, peace, charity and compassion in our hearts.”

The religious superiors also said that jubilee celebrations, according to Scriptures, had a special impact on the ownership and management of land in the Land of Israel.

“According to the Book of Leviticus, Hebrew slaves and prisoners would be freed, debts would be forgiven, and the mercies of God would be particularly manifest,” the statement said.

While such was the biblical interpretation of "jubilee," the AMRSP said the modern-day implication of the concept meant no less than restoring the balance between nature and man.