Renewable energy can be a major money spinner 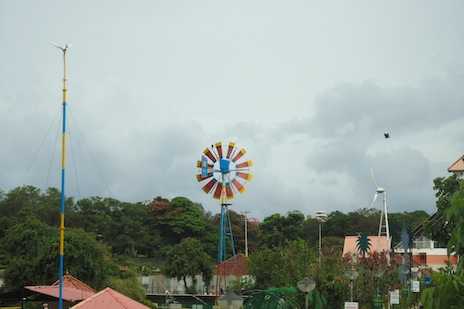 Greenpeace says renewable energy projects like this in one in India can not just save but earn money (photo: Wikimedia Commons)

Environmental group Greenpeace today urged the government to promote an "energy revolution,” turn its back on fossil fuels and be Southeast Asia's champion in the use of renewable energy.

In a new report titled Green is Gold: How Renewable Energy Can Save us Money and Generate Jobs, Greenpeace says the Philippines can turn a significant profit from massive renewable energy (RE) investments.

The report outlines how RE can save the government money, create wealth, generate thousands of jobs, make electricity available and more affordable to all Filipinos, and promote national energy independence.

It includes estimates of employment creation that renewable energy has brought elsewhere and could bring to the Philippines. It explores the issue sector by sector, focusing on solar, wind, mini-hydro, geothermal, modern biomass and ocean energy. It also touches on how manufacturing renewable energy products locally can generate employment.

In terms of revenues, the report also provides data on how geothermal energy, considered a mature industry in the Philippines, has saved the government over US$7 billion since 1977.

It concludes that the Philippines has the natural resources to propel itself as an RE leader in Southeast Asia.

"The future is in renewable energy, not in outdated and environmentally destructive fossil fuels," said Anna Abad, a climate and energy campaigner for Greenpeace Southeast Asia.

Currently, the Philippines gets 17 percent of its power from alternative sources of energy, but Greenpeace says the country has the means and opportunity to get much more.

However the country’s vast RE potential of about 261,000 MW remains untapped, with investors now moving to other markets in the region after being discouraged by a succession of major coal projects announced by the government.

Greenpeace believes one of the reasons why renewable energy has not taken off faster in the Philippines is the prevalence of misconceptions that seek to discredit cleaner electricity sources, in order to keep the coal industry profitable.

“We all need electricity. It is vital,” said Von Hernandez, executive director for Greenpeace Southeast Asia. “But we need it to be clean and sustainable," he said.

Hernandez said the Philippine government faces a choice: to continue building coal plants that cause climate change and do not bring much economic benefits, or to go renewable.